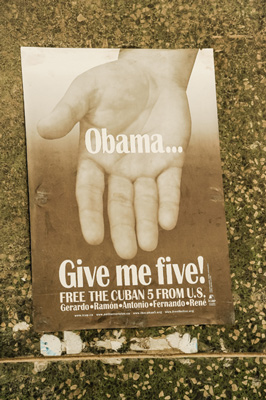 HAVANA TIMES — The United States of America, the global policeman, is “changing its relationship with the people of Cuba”, as President Barack Obama put it. With this announcement of a resumption of diplomatic relations after John F. Kennedy severed them January 1, 1961 we need to evaluate what is behind it and what is positive and negative.
I feel compelled to spell out my take on this new policy after having Cuba in my heart for five decades, from the day of my first protest during the Bay of Pigs invasion, April 1961, and after living there and working for the Cuban government from1987 to 1996. (1)

Beatings at US “blacks sites”, as they called them, or at rendition secret jails in countries the US now wars against (Syria and Libya), was kids play. These leaders of democracy and human rights rammed broomsticks up rectums, used water boarding or near drowning, sexual/rape abuse in many ways including tearing rectums apart, forced sleep deprivation for several days, shackling hands over heads without touching the ground for days, constant loud noises, threatened torture and murder of prisoners’ children and parents…And that is what is admitted.

The US has continually accused Cuba of torturing its people, and yet has never come up with evidence. Yet it has tortured hundreds of thousands of human beings, including in its own prisoners, for two centuries? The US even conducts torture training to Latin American military personnel at a military base at Fort Benning, Georgia, the School of the Americas.

“Normalization is a result of US corporations seeking profit opportunities in Cuba, such as developing broadband Internet markets.” With normalization “comes American money and a US Embassy. The American money will take over the Cuban economy. The embassy will be a home for CIA operatives to subvert the Cuban government. The embassy will provide a base from which the US can establish NGOs whose gullible members can be called to street protest at the right time…Normalization of relations means regime change in Cuba.”

That comes from a former US government assistant secretary of the treasury. And that is what Cuban solidarity folk should be worried about instead of calling upon Cuban supporters to give thanks to Obama, the leader of the greatest terrorist state in the history of humanity.
—–
(1) See my CV and books about Cuba http://www.ronridenour.com/about.htm, and my analyses of Cuba at www.ronridenour.com