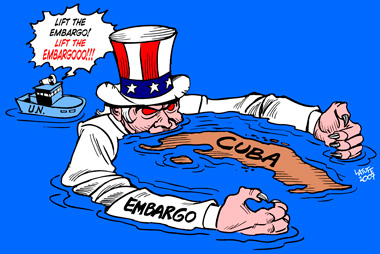 HAVANA TIMES – Once again, a resolution was passed by the UN General Assembly against the US embargo on Cuba (blockade according to Havana) on November 1st. The same thing has happened on 27 consecutive occasions and this time, like many other times, there were only two votes against the resolution, the US and Israel.

This is undoubtedly a crushing diplomatic defeat for the world’s largest power and ally of Cuba’s opposition, who counteracted the 8 amendments linked to human rights violations on the island in vain.

Even though the resolution isn’t binding in any way, its approval marks the international community’s position on the US’ policy on Cuba. Washington needs to sit down and analyze its diplomatic strategy again as it has been clearly defeated by the Cuban government, because even its closest partners in the world (except for one) have left their side in this dispute. There are clearly some underlying problems.

Personally-speaking, I oppose the blockade out of principle rather than pragmatism. I feel the same way democratic Governments do who know that basic human rights are being violated which stand in the way of freedom and any trace of democracy, but can’t approve of an embargo that borders on the concept of blockade because of its extraterritorial nature. That’s the truth, even though they believe that it might be the only way to pressure the Cuban government to move towards a democracy.

I think that the fact that the entire world is voting against the blockade 27 years in a row and only two countries are supporting it, only serves to benefit the Cuban government and moves away from any real chance of democratic change in Cuba. Because while US diplomacy and our opposition have been weak in their arguments to convince us, the Cuban government’s diplomacy and propaganda is very skilful, exact and opportunistic, coming out victorious in every way.

Not only have they managed to victimize themselves with the US embargo, but they are playing down their human rights violations by magnifying their international solidarity efforts in education and healthcare. The fight against ebola was a masterful diplomatic job that continues to rake in benefits even today. Their education program “Yo si puedo” and “Operacion milagro” with cataract operations have been too. Many people in the world can’t believe that a government that appears to be so altruistic with the rest of the world is able to tread all over its own people’s human rights.

In my opinion, the smartest thing for the US government could do would be to focus on showing a sincere will to lift the blockade because of its negative effects on the Cuban population, regardless of whether this might benefit the Cuban regime. And then they should pass on the responsibility of choosing whether it stays in force or not to the Cuban people themselves, as part of a national conflict between the Government and its emigres/opposition, not as a conflict between a small country and a superpower, which is how it has been perceived up until now.

Between a big and small opponent, people tend to inevitably stand in solidarity with the small one, whether they are right or not. Throughout the entire US-Cuba conflict, the small island will always hog others’ solidarity. However, if the conflict were between the Cuban government and its emigres/opposition, the small and defenseless subject of the story would change.

The US embargo/blockade started off as a hurt superpower’s mad reaction, who didn’t accept that they were losing political hegemony and their economic interests on a small island that had been dependent on them up until then almost as if it were a protectorate. Aggravated by the Cold War, it was also a clumsy reaction as it favored the Communist USSR’s penetration of Cuba after they tried to isolate it. And then, tensions persisted in a game of dominoes up until the present day.

However, the situation has changed, and the US is negotiating with China and Vietnam, and yet things are still different with Cuba. Why? It’s simple, only 90 miles separate the US from Cuba and 15% of the Cuban population live in the US in a very prosperous and influential community after six decades of exile and immigration which have remained steady up until now. Ironically, the Cuban people’s greatest wish isn’t to stand with the Revolution which says it represents their interests, but to emigrate to the US, the Revolution’s sworn enemy, which is embargoing them.

The main reason the US embargo/blockade remains in force for over fifty years, is because of Cubans’ political influence in the US government, so it essentially boils down to nothing more than a conflict between Cubans. Even though there are other secondary factors that are important such as Cuba’s role within the region and worldwide against US interests; the geopolitical matter when it comes to enemy powers; or the unresolved issue of compensation for nationalized companies and assets. These are all secondary influences in my opinion.

That’s why I believe that the US should put the end of the blockade second to a negotiation between the Cuban government and its emigres/political opposition, where it would act just as a mediator. Interests of Cuba’s national and foreign opposition join with the emigre community’s interests to a large extent because of the fact that the reasons people emigrate are generally the same as those that motivate peaceful opposition.

It’s not rocket science. With this focus, the responsibility for ending the blockade would be in Cuban hands 100% and it would be up to the Cuban government to make a clear decision. And if the Cuban government refuses to recognize the rights of its emigres and opponents, if it doesn’t accept the most basic democratic precepts for national reconciliation and respecting human rights, not only would this support the US blockade, but it would also mean that they lose the majority of the international community’s support.

In order to bring about a democratic change in Cuba, reality is crying out to us to do something different. Obama understood this because he is a very smart politican and he wanted to find another way. He pushed for the end of the detente and US blockade, almost unconditionally, so as to push for change through values coming face-to-face, with exchanges and new situations that would arise as a consequence of this rapprochement.

A slow and risky oath but it was better than the current one, which is the same ironhard and stubborn path of the past, which Trump adopted again even though it has proven to be unsuccessful. Carrying on like this will only help to perpetuate the system by giving it arguments to strengthen its role as a victim in all of this.

The ideal outcome would be that the end of the blockade (as it exists even if it is wrong) serves as political pressure to force the Cuban government to negotiate. However, not with the US government but with its own people who form part of its peaceful opposition both on and off the island. Now we need to ask ourselves whether this opposition is ready to take on such a challenge and whether they can come together in spite of their differences to form a Democratic Coalition in favor of a better Cuba “for everyone and for everyone’s wellbeing.” That is the enigma.