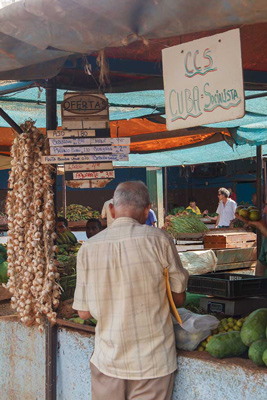 HAVANA TIMES — Count your money and set out to buy your groceries at a farm products market in Havana. A pound of pork costs as much as the average salary earned in a day by a health professional, even after the much-talked-about wage increase in this high-priority sector.

Look at the scales carefully, making sure you’re getting your money’s worth. Then, turn to look at the vender and complain over having been shortchanged.

You will likely get one of two possible reactions: the ferocity of a cornered animal, ready to strike back at you, or a cynical and mocking smile that asks whether you live in this world or have just arrived from a different planet.

Some days ago, the Cuban news segment Cuba dice (“Cuba Says”) hosted by Talia Gonzalez again touched on the issue of how consumers continue to be cheated by vendors. The journalist, who insists complaints must be lodged and arguing that there is a legal framework and a place where such customer complaints can be registered, strikes the viewer as naïve and somewhat out of touch with reality, prompting yet another mocking smile.

The message is, when all is said and done, the revolution is not to blame – it’s just something we Cubans, who till now have not known how to demand respect for our rights, have to sort out amongst ourselves.

Let us look at the backdrop of the above situation, an overwhelming reality we have known for more than half a century. Let us talk about what Cuba isn’t saying.

We may not be the most intelligent people on the planet, but, we have no shortage of street smarts. Why is it, then, that people accept being cheated without double checking the weight of the product, without complaining to the manager of the market?

An old saying says that one cannot be both the judge and the accused at the same time.

Management at the markets operate the verification scales. Therefore, they will always take the side of the vendor, with whom there is an evident, everyday complicity. Why do I say this? Quite simply because the little extra money the management needs to make ends meet depends on the market’s takings and these takings depend on how much the vendors can snatch from the customers’ pockets. 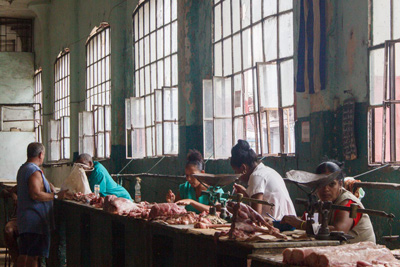 If public officials wanted to buy their daily bread at the market on their salaries, they would find out these are markedly inadequate. If our journalists omit these truths, then we are working with an equation that yields erroneous results owing to the omission of one or several terms.

The above situation, which is both undeniable and serious, is what prompts the angry or cynical attitude of the vendor when faced with customer complaints. What they are thinking, explicitly or implicitly, is something along the lines of: “You complain to me, knowing I have the same problems you do. We’re both in a bind because of the government, which created this crazy economy. If you buy things here on a daily basis, your money is coming from something other than your salary. I have the same problems you do, so don’t complain and accept things as they are.”

Most customers ultimately calm down. They may be told they are right at one point, but vendors will never cease in their steadfast efforts to shortchange customers. Their livelihoods depend on it.

There are other reasons for this, which Cuba dice also fails to address.
Corruption is eroding Cuban society both vertically and horizontally. It affects everyone, from top government leaders to simple workers, and it pits workers against one another in a fight for survival. For instance, securing a stand at any farm products market in Cuba is difficult. It is a coveted position, much more – alarmingly – than that of a high school teacher.

In addition, many of those selling products at markets are subject to a mechanism inherited from capitalism, known as caballaje. The locale actually belongs to another person, who rents it out illegally to the vendor. The vendor pays the owner a daily sum for their “favor.” I recall that Aracelio Iglesias, a courageous trade union leader, fought tirelessly against this practice, which was very common in Havana’s port area. 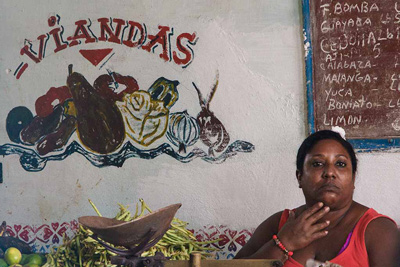 These circumstances lead to the “sale” of those positions capable of generating extra cash, a sum that is then divided up among those involved, including the bureaucracy, which signs the pertinent “authorizations.” The tree is bent at birth. It continues to bend as it grows and, by the looks of it, will never straighten out on such terrain.

The worst part of this, as I hinted at above, is that customers become involved in this mess, because something similar happens in their world, a world all of us are a part of. That is why they ultimately accept the whole thing, and why this demoralization which deters any kind of complaint continues.

Are we in a typical blind alley? I don’t believe so. All we need is a new harvest, capable of eliminating the bad way in which the earth was first tilled. It is a question of eliminating the State’s noxious intervention, of empowering workers along the services chain, from the production stage to the sales outlet.

We’ll always have indispensable functionaries that will have to be excluded from the said chain and receive a decorous salary, with which they can meet their daily needs. The same holds for all of the country’s workers, for no one can evade the condition of customer.

For the time being, we are in a vicious circle we cannot break with half measures that are slow and limited. We need a good shove. Then we will be able to say with confidence that Cuba has spoken.

4 thoughts on “What Cuba Isn’t Saying on Television”