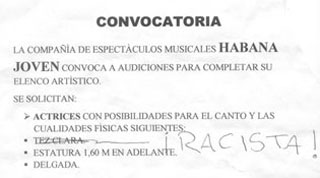 HAVANA TIMES — I saw a little sign posted at the bus stop on the corner of 41st and 42nd Avenues in the Havana municipality of Playa. Its source couldn’t have been more common: a young artistic company that needed to complete its cast and was therefore announcing auditions.

The problem appeared in a number of prerequisite physical conditions required of the candidates. The first was that any short girl — no matter how good her voice — wouldn’t be accepted (though this is somewhat common in modeling and perhaps other pursuits where it’s important for the participant to be seen from far away).

The second prerequisite, which was the most outrageous and truly intolerable, was that the young women had to be “light-skinned.”

If Whitney Houston, Rihanna, Tina Turner or Diana Ross were reincarnated in Cuba, they wouldn’t be able to audition for this company, “Habana Joven.”

I’m not saying that Habana Joven company is a conscious participant in this immorality. It could simply be that certain attitudes are internalized and become natural trends.

If they were to pass through the doors of the Mariana Grajales Theater for the audition, an employee would probably inform them that they didn’t meet the standards of that demanding group.

Perhaps if they were to undergo some whitening treatments, like those received by the world famous “King of Pop,” Michael Jackson, they might be granted an audition – but not before that.

All of this angered me enough for me to pull out my pen and write the epithet “RACIST!” on the sign.

I spent a couple of days contemplating a conspiracy worthy of a TV sitcom: a telephone call to the company, pretending to be the representative of a young woman “who sings extremely well, but is a little dark, to see if she can have a shot.”

I wanted to see out how far they were willing to go with their damned audition, but ultimately I didn’t do anything.

When I passed by that corner again, the sign was still there – along with my added comment. I tore it down and brought it home to scan it so I could produce this article.

It’s no secret that racism still exists in our society, 21st century Cuba. Education and culture can slowly reverse it, cornering it in the deepest recesses until it finally disappears.

Much has been done here along those lines, I agree, but at some point it seems we reached a stalemate and have even begun to slip backwards. Discriminatory prejudices have extended themselves to public expressions to the extent that they’re reflected on signs, like on this occasion.

Retrograde positions can be stimulated by inequalities, which are being re-established and deepened in our society. The jungle of individualism and the mercantilist paradigms that we’re beginning to focus on constitute good breeding grounds for the flourishing of self-centered attitudes.

If Whitney Houston, Rihanna, Tina Turner or Diana Ross were reincarnated in Cuba, they wouldn’t be able to audition for this company, “Habana Joven.”

These, in turn, imply using any resource that’s effective — racism, for example — for trampling on and overtaking others.

I’m not saying that Habana Joven company is a conscious participant in this immorality. It could simply be that certain attitudes are internalized and become natural trends.

People lose sight — especially if they aren’t directly harmed — of the negative potential of some positions. At the same time, they seek to accommodate these in what they believe yield greater benefits.

In this way, one might need actresses and then search for them within the prevailing archetypes of beauty. Through this, they’re engaging in prejudice and reinforcing it with their attitudes.

Government educational systems continue to be swept under by the generalized national crisis while weighed down by bureaucratic and authoritarian mechanisms petrified in time.

Little can be done to reverse the advance of the new realities, the spread of racism can’t even be contained in the classroom.

However, blaming the younger generation or their teachers for a society-wide problem doesn’t advance us one iota.

This problem, like many others, needs to be spotlighted so that it can become a serious challenge for all actors who decide to play their roles, whether in government or civil society.