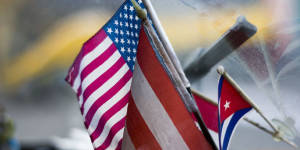 HAVANA TIMES — Until recently, it looked like President Obama was winning the fight between those who support and those who oppose his Cuba policy changes. The discussions with Cuba apparently continue to move well towards the establishment of full diplomatic relations.  And the Administration is apparently betting that it has the perfect formula to be accepted by Cuba, and also supported by sufficient US political forces to be able apply a new policy of “soft power” towards the island.  A policy that supports an end to the embargo, but that also continues to support the democracy programs that Cuba considers part of a policy of subversion for regime change.  “Engagement” instead of direct force.

With important segments of the press and public opinion in toe, the recent mood has been that the changes are irreversible, and that they would even occur rapidly. But two recent votes in the House of Representatives, and another one expected this coming week, have challenged these expectations.

Supporters of a travel ban and embargo fight back

For the first time, last week the opponents have forcefully deployed their legislative tactics, with considerable success.  As a result, we know a lot more about the thinking of more than 100 representatives about the issue, a key fact for projecting to the future.  And the facts suddenly no longer suggest that the changes are irreversible, at least in the short or medium term. It goes without saying that Cuban-American congressmen were in the lead of these efforts.

The House approved and will send to the Senate two bills–for the budgets of the departments of Commerce and Transportation–each with amendments that would sink any efforts to facilitate travel to, or trade with, Cuba, two key elements of Obama’s changes and of the legislation behind the embargo. An amendment that would refuse to fund an eventual American embassy in Cuba is expected to be successfully added to a similar bill for the budget of the Department of State next week.

The two bills passed with majorities of 120 and 71 votes respectively, numbers that for the first time reflect how many representatives think in the Republican-controlled House.  In contrast to the mood of supposed irreversibility, it looks like there is an important majority supporting not only of the embargo, but also in favor of rolling back even the modest changes by the Administration.  In other words, forget about eliminating the prohibitions for tourist travel or normal trade with Cuba, which would require eliminating the embargo’s legal framework.  Bad news for the supporters of the policy changes.

It is true that it is unlikely that the Senate will pass those bills, and the White House has already indicated its decision to veto them if they arrive in their present form—in part for the Cuba related amendments, but primarily for more important federal budget reasons. But a poor outlook for these bills with respect to their fundamental objectives is not what really counts with regard to the Cuba policy changes.

What matters are the margins of victory in these votes.  Putting aside the enthusiasm of these first few months, a true change in policy depends on the possibility that the US will abandon its embargo, which requires a majority on both the Senate and the House.  From that standpoint, the irreversibility of the changes in the short and medium term no longer look so promising.

To put these votes in context, it is worthwhile to summarize the status of another proposed bill in the Senate, among many others regarding Cuba, both for and against the changes. The one that has publicly received the most support is a bill that would eliminate the travel prohibition for US citizens and residents. This is a proposal that deals with a theme of personal liberty that is considered very important by Americans, and which is important in the US tradition. It has 37 sponsors at present, a sizable if not decisive number in a Senate of 100 members.

Even if we assume that the bill could reach majority support in the Senate, however, what would be its future in the House, in light of these recent votes?  Poor, if not impossible. Despite the fact that the issue is probably the one with the most popular support in the US.

It looks like the re-establishment of full diplomatic relations is coming, judging from the statements by both countries after the most recent negotiations, and because it is a decision the President can take on his own. But in the short run that would hardly amount to much more than the symbolic raising of the national flags in the two buildings, because it is not even clear that the Senate would confirm a nominee for Ambassador, or would give financial support for the level of embassy that Obama’s policy would require.

It is true that the Administration and others still have more than a year to try to give momentum to the changes. It is also true that we still don’t know how much influence the incipient business lobbies may have. They are still forming and catching speed.  On the other hand, although it seems improbable that a Republican president could go back and break diplomatic relations, he could certainly pull back many of Obama’s executive measures.  Proof are the past examples of Reagan and Bush II. Even with a Democratic victory for president, we are talking about a tie, not a victory by either side of the dispute.

While it is true that the projection in the long term, for numerous reasons is for a change in policy like Obama’s, it also looks like in the short and medium term, except for an unlikely political earthquake, everything is in doubt except the establishment of full relations. With regard to true normalization, which both countries recognize, at least at this point, would require an end to the embargo, the votes in the House suggest that we still have a long wait.

40 thoughts on “Will Congress Stop Obama’s Plan for US-Cuba Change?”