HAVANA TIMES — In 1961, Fidel Castro pronounced the now famous words, “Within the revolution, everything; outside of it, nothing.”

In the title, I substituted the word “Church” for “Revolution,” which has cost us dearly over the past half century. In the name of “revolution,” dissent was brutally eradicated and the worst Stalinist processes organized.

Once in power, “revolutionary” forces also trampled upon critical thinking, and in an increasing manner, just as the very concept of “revolution” was being narrowed. Ultimately, many “non-conformists” ended up in forced labor camps.

Finally, based on that argument, a dichotomized interpretation was orchestrated consisting of good and bad, advocates and detractors, which ended annihilating the political creativity of the society.

That ghost now returns in the middle of a controversy between critics and defenders of Cardinal Jaime Ortega and the role that the Catholic Church is playing in the Cuban political process.

It has been an unfortunate discussion due to outrageous verbal attacks that have been launched against Ortega in yet another example of poor democratic education and deficiencies of basic courtesies that still prevail among important sectors of our national community, both on the island and abroad.

All of this is reprehensible, just as it’s reprehensible to think that the Catholic Church — as a public institution with its own social base — has no right to be a part of the process of the needed redefinition of the Cuban social system, and that it cannot do this based on its own interests and perspective.

But the barrage of insults and profanities should not block the basic argument within a discussion about a matter as delicate as this, which ultimately relates to the pluralistic quality of the reconstruction process and/or national reconciliation.

This discussion is also defining a complex scenario in which the Catholic Church is assuming a leading role in the public arena, though not because it has earned this in a process of political competition and open dialogue, but through its appointment by an uncontestable political power that is not subject to electoral scrutiny.

In other words, while the Church’s designation may have been politically effective, the action suffers from severe legitimacy deficits.

The Catholic Church — and conservative ideological bloc that is generated around it — must assume, without resentment, the paradoxical situation in which it finds itself placed. It must understand that its right to be a counterpart in the so-called reconciliation process has transformed it, as if by magic, into being the only certified counterpart of the state and the Cuban political elite.

This apparently privileged position has costs that must also be assumed. Again, I don’t think that insults and condemnations are advisable or necessary. But I do in fact believe that critical assessments are both, even when the criticisms penetrate to the core of the matter and injure more than an overly sentimental heart. 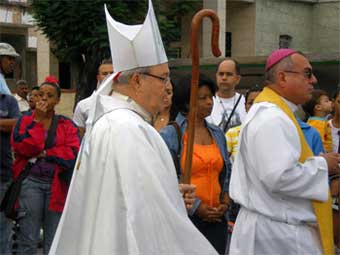 It’s simply because this is politics, as Weber once said, a dance with the devil in constant competition with the goddess of love. In such a heated struggle one always has to expect stepped-on toes, elbows in the side and the occasional bad word.

But I fear that supporters of Cardinal Ortega — and supporters of this orderly transition, in which I find increasingly more order than transition — are treating the matter just as it should not be treated. They don’t argue, instead they deliver strikes with their giant swords.

They don’t explain what they want; instead they place faith before reason and begin to bring the secular political arms of the Church closer to the very word of God. And finally they offer us a new dichotomous disjunction.

Once again it becomes a dichotomy between good and bad, virtue and sin – a Manichean shot in the temple of political creativity. Once again we are faced with a narcissistic ideological construct of sacred aspirations that are therefore unappealable and uncontestable.

Note that I’m not talking about the rigors of the situational collision in which we observe the permanence of Jaime Ortega in the archbishopric and the continuation of the openness game, but instead something more structural, something that seems, unfortunately, to be more and more of the same.

I have before me an editorial from Espacio Laical (EL), the magazine of the Catholic Archdiocese of Havana. The first thing that jumps out at me from reading it is the wholesale denigration of those who express opposing views.

Espacio Laical speaks of “others” as people “without clear and universal aims,” “full of hatred, prejudice and in some cases without the slightest bit of political intelligence,” fed by “simplistic and unilateral readings” – among other flattering remarks.

But what is even more serious, it doesn’t use simple earthbound denigration, but theological tacks.

Through all of this, those opponents — hateful, prejudiced and unintelligent — do not confront an institution on the earth, but a sacred mission that the editors of EL call “the only path that will lead the country out of crisis” employing “a methodology of virtue and piety” based on the gospel.

This is a dichotomous dilemma with only two conflicting options: on one side there’s a path that lifts us to the heavens, and another one that plunges us into the depths of hell.

I should note that the writers of EL have in their favor the good pens and poise of seminarians. When it comes to other articles written by partisans less intellectually advantaged, what occurs in the context of that skirmish is somewhat embarrassing.

I have read articles by novices — and novices are always insecure and uncontrollable — who valiantly charge against intellectual programs and figures with the worst arguments in the world.

This is to say, they are placing themselves on the same level with those who have attacked Cardinal Ortega, and like them they end up shoveling mud on the very Church that they awkwardly wish defend.

I think there are many reasons to criticize this political move by the Catholic Church, without it meaning that one is being ultraconservative, extremist or Plattist.

I admit that the mediation by the Church produced some positive results. I applaud it having contributed to the release of dozens of political prisoners. It’s true that the release for the most part turned into induced exile, but that was not the fault of the cardinal – it was yet another whim of the government. Nonetheless, the cardinal is guilty of not even blinking.

I think that it is positive that the Ladies in White have won some brief opportune space and that thanks to the Church itself they have generated some meager and well-defined platforms for discussing the national situation.

But at the same time (although I admit that negotiating with the Cuban government is like trying to catch a rattlesnake while wearing a blindfold and using only your bare hands), I do not think that what has been achieved — or what can be achieved with the current methodology of virtue and piety — constitute significant steps in the democratization of the country.
What was obtained was very little and was at the expense of major concessions made by the Church. It can be said that — more than a commitment to democracy — what has been obtained is a pact for governance that provides the Cuban political elite wider margins of maneuver to manage the process of pro-market opening on its behalf.

And the Church — unless all of this ends in a political cataclysm — will at best be able to gain a greater presence in Cuban public life, a few pastoral advantages and the formation around it of a conservative ideological bloc outside of places of worship.

But that isn’t much. This is because the Church didn’t understand that the Cuban government needs it more than the Church needs the state. This is why the church hastened to accept a compromise that would have required a certain art of waiting, as could happen if emigrants are overly quick to agree to the first wink from Havana.

There’s another reason why I’ve been critical of this unilateral arrangement of accommodations. Everywhere, including in Cuba, the Catholic Church has a positive record in terms of providing social assistance and charity.

Within it there are groups all around the globe that have cast their lot with the poor and the vulnerable, and they have done this in an admirable manner.

But at the same time, the ecclesiastical hierarchy is a direct part of a deep moral crisis (i.e. economic fraud, pedophilia…) to which it has not been able to give a convincing response.

It is a church that adopts frankly medieval approaches to such sensitive issues as marriage, the right of women to control their bodies and homosexual relationships.

It is an institution that is internally organized on principles that are authoritarian, sexist and “go against nature” (examples of which include the subordinate roles of women and celibacy).

And if all this is true, what is the basis of the idea that “universality” on the part of the ecclesiastical hierarchy and that we critics are fed by simplistic and unilateral readings?

The Catholic Church wants to engage in politics, but modern politics isn’t a matter of catechisms. Let’s leave the saints out of this and speak clearly: the Catholic Church, as a political actor, has the right to trial and error, but it is also exposed to criticism.

Cardinal Ortega has exercised that right, and I think that he is wrong on sensitive issues such as when he called the police to clear protestors out of a church, and when he allowed his spokesperson to write a news note in the Granma newspaper that seemed too strong to everyone.

Likewise, when he railed against those occupying the building with the same arguments — in more or less detail — as those used by Cuban security services.

He is entitled to make mistakes and no one has the right to ask for his crucifixion or to offend him. But inevitably this will expose him to criticism.

If the various members of the bloc for an “orderly transition” want to absolve the Cardinal of his errors and all, they are fully entitled. But they have no right to consider “hateful, prejudiced and unintelligent” those who aspire to better absolutions.

I think the Cardinal would have grown a lot had he recognized his error, and he would have given all Cuban political leaders — in the present and the future — a gratifying sign of humility.

Likewise, his allies on the island and those who have emigrated would have done a favor if they themselves had taken a less dogmatic and more reflective position…I would say more constructive, less Manichean, less dichotomized – in short, less backward.

In the end, let’s not forget, we are in the 21st century and we require a political society at this same level.
—–
(*) A Havana Times translation of the original published by Cubaencuentro.