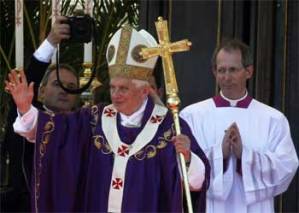 HAVANA TIMES, March 29 — The second papal visit to Cuba ended with no surprises.  Benedict left no doubt about what the Catholic Church is betting on: For “lack of time” he didn’t meet with the Ladies in White or other dissidents, yet he found space on his agenda to see Fidel Castro.

Despite the irritation stirred up by anti-Castro elements within and outside the island, the truth is that the Pope did nothing more than continue the pattern started in 2008 with the visit of the Vatican Secretary of State Bertone Tarciso.

Benedict’s homilies in Cuba were so general that they could have applied to anywhere in the world. If something was emphasized, it was the need to promote spirituality and for the Catholic Church to expand into new social settings.

The Pontiff insisted on the church being allowed to participate in education, as it did before 1959. Fidel Castro himself was educated at a Jesuit boy’s school, though despite this, his Revolution converted those into public schools.

This is one of the issues most difficult to solve for the church because education in Cuba is free, and 100 percent of school-aged children are enrolled. In addition, academic training in Cuban schools is accompanied by the planting and nurturing of socialist ideas.

It would be interesting to know if the Cuban government is prepared to allow schools to open where tuition would have to be paid and in which they would teach children about the Calvary of Jesus Christ instead of the heroic deeds of Che in Bolivia.

For the time being, it seems that the legendary Argentine guerrilla will remain where he is. As a matter of fact, during the Mass, his face was right in front of the altar that was set up in Revolution Square, so every time Benedict XVI looked up, he would see Che’s gaze.

In any case, the Cuban Catholic Church lacks deep enough roots in society for it to make demands on the government. Evidence of this was the relatively small number of people attending the Mass, even though many government employees were give “orientations” to attend.

There were so many “non-Catholics” that the priests were forced to explain over the loudspeakers that there could be no shouting of slogans, waving of flags or applauding during the services – completely normal conduct at any political rally in Cuba. 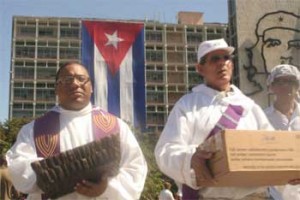 Cuban Cardinal Jaime Ortega himself tried to explain away the modest participation by saying that many people would watch the Mass on television, and — fudging his words — spoke in terms of most Cubans being “believers” – avoiding the word “Catholics.”

The Vatican’s spokesman said that 300,000 Cubans turned out for the Havana Mass, a figure that seems exaggerated, though there were people from the provinces of Matanzas, Pinar del Rio and Havana, which include a total of 3.5 million inhabitants.

Most Cubans I spoke with agreed that Benedict doesn’t have the charisma of John Paul. It’s true that the two are very different, but Cuba isn’t the same either. Above all, church-state relations have changed.

If the purpose of the earlier visit by the Polish Pope was to “open Cuba,” this visit by the German seems to have been to consolidate the space won, offer support to the moderate sector of the Cuban church (headed by Cardinal Ortega), and to try to collect on some of the bills for support provided.

Moments before leaving, the pope touched on the political issue, proposing “a society of broad horizons, renewed and reconciled,” one in which “no one is prevented from taking part in it (…) due to limitations on their freedoms or because of their being excluded from it out of apathy or the lack of material resources.”

He immediately balanced that statement, however, by noting that this situation “is exacerbated when restrictive economic measures imposed from an outside the country weigh negatively on the population,” thus attacking the US embargo of Cuba.

The government was equally frank. Foreign Minister Bruno Rodriguez said he “would listen” to Benedict XVI with respect, but Vice President Marino Murillo confirmed that the socialist goal was still in force and therefore there would be no political change in Cuba.

Neither side said anything that wasn’t already known, but what was essential was not what was said, but what was done. The government provided the infrastructure, mobilized state employees and the communist masses, while the Pope discredited the opposition – refusing to even listen to their gripes.
—–
(*) An authorized translation by Havana Times (from the Spanish original) published by BBC Mundo.