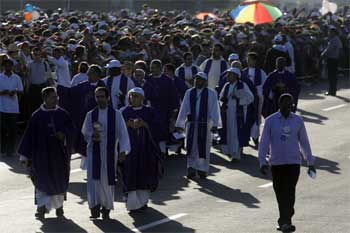 HAVANA TIMES, April 21 — The recent visit of Pope Benedict XVI came at a time when Cuban society is going through a crucial juncture in its history: The physical decline of Fidel Castro along with the political and economic decline of the centralized system of “state socialism,” which he sustained.

This occurs as his brother and successor is developing a set of economic measures being called “updating.” This is an attempt to maintain the failed system of state monopoly capitalism, which traditionally masked “real socialism” in the twentieth century.

This effort is being implemented through the gradual introduction of economic reforms, but without specific movements that demonstrate the intention to advance the democratization of Cuban society, which is widely demanded.

The situation is exacerbated by the prospect of what might happen with Chavez and Venezuela.

The pope’s visit was an extraordinary opportunity for the government to show its tolerance and its democratic vocation. I stated this in a previous article concerning that event.

However, the government’s behavior appeared more like a paramilitary operation designed to face an eventual uprising than preparations to receive a special and friendly visitor.

They conducted a broad and silent crackdown mounted to “keep the order,” during which time hundreds of people were victims of repression to varying degrees: Some were jailed without any legal procedure, others were forced to stay at home and more than a few peaceful citizens were warned or somehow threatened concerning the type of behavior that would not be tolerated during the pontiff’s stay.

In addition, many mobile and landline phones ceased working at the same time that the Internet collapsed for those who were not a part of the information system that was set up by the government for the Pope’s visit.

Some described this operation as a true test of a state of siege, one capable of “shutting down” all forms of opposition in a situation of political emergency.

The two papal Masses were filled with Communist Party members and soldiers in civilian dress who were mobilized by the government. They attended the ceremonies that weren’t for them and that they didn’t understand. Meanwhile, many parishioners, Catholics and simple believers couldn’t get near.

In Mexico, the papal fiesta was for Catholics; here it was taken over by the government.

There was unfortunate display of aggression when a Red Cross worker slapped a protestor and then hit him with a furled-up stretcher. In a deplorable and disrespectful act, the demonstrator had interrupted the silence of the Mass by shouting an opposition slogan. This whole stunning incident was seen around the world.

The security apparatus assembled for the papal visit could not prevent the incident, which — together with the wide-ranging repression aimed at silencing the opposition — which have remained among the most significant public reflections of the event both online and in the international press.

Did so much “order” and control reveal the discipline of the people or merely the heavy hand under which Cuba is governed?

In any case it demonstrated the difficult task facing those of us who hope the party-government learns to deal peacefully and democratically with the increasingly widespread opposition, needing to voice their demands openly and willing to do so peacefully.

Any interruption of the papal Mass by extremist elements of the opposition would have only served to demonstrate their lack of consideration and respect for the Holy Father, the Catholic religion and all of those Cubans who were interested in showing their hospitality.

But the government operation didn’t give them that opportunity. It prevented the extreme right from “misbehaving,” which would have received the absolute mass rejection, not only by Catholics themselves but probably even by peaceful and democratic dissidents.

The radical opposition was therefore prevented from becoming even more isolated than they are today; thanks to the actions of the “counter-intelligence forces” (what they call themselves), which achieved the very opposite effect. They don’t listen to advice – and we know what happens to those who don’t listen to advice…

An apparatus that acts in this manner only demonstrates its fear of any changes, and without realizing that the democratic current dammed up for these past 50 years by “bureaucratic socialism” would flow with less pressure the more open the floodgates.

Conversely, the smaller the escape valve is open, the pressure can accumulate to a degree as great as any dam, and the contents will eventually burst out and scatter all over.

These actions don’t promote the “unity of the nation or greater democracy for society,” as the president himself has called for. Nor do they encourage the necessary dialogue demanded by the situation and by much of the population, whose numbers we don’t know since there are no democratic measures though which to measure what the majority is.
At the same time as all this, Vice President Marino Murillo (the author of the “economic updating model”) told the press corps covering the visit “there will be no political reforms” in Cuba, ??which will go down in history as a “camillazo” (a furled-stretcher blow) to democracy, which in no way helps the government, its economic management or much less its political future.

Some say the the Catholic Church won, others say the government, others say that both did, but few realize how much the opposition won with that “camillazo” and the information “blackout” that was imposed by the government (whose officials probably issued commendations to each other for their “fine results”).

Does anyone honestly believe that the Pope could have been physically assaulted by some Cuban citizen?

Has anyone asked how much the government spent on all the personnel and resources to affect this demonstration of control? We can only imagine the negative balances left in its wake?

Could there be any real relationship between the strength of the opposition in Cuba and such governmental deployment and effort?

If the opposition is not allowed to demonstrate publicly and peacefully, how does one know if there are only a few isolated malcontents or many more dissatisfied people?

Or, was this just another act of foolishness that demonstrates the “need” to give more funds to the bureaucrats of repression who for some time haven’t heard any explosions or any calls for “counterrevolution” or discovered a new attempt against the life of the Commander on the part of an opposition that has chosen the peaceful path?

Isn’t this an indication that the government should adjust the way it deals with the opposition and realize that it’s time to start a dialogue with everyone? Shouldn’t they realize that the Catholic Church and many others will defend and support us?

The Pope’s visit left us with many lessons. Let’s hope everyone draws the appropriate conclusions.

And please, yell at those who screwed up, not at me for pointing out that they did.
—–