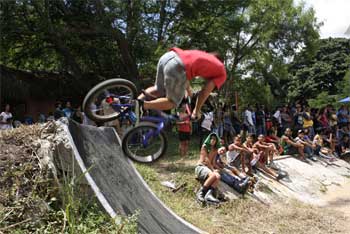 HAVANA TIMES, Sept 5 — One of the most followed competitions for those youth who love the rush of adrenaline took place the last Sunday in August in Havana.  Many of them participated in acrobatic sports in which they don’t care about the consequences of not having the required safety equipment to perform complex aerial pirouettes.

Yet these competitors demonstrated their solidarity by loaning each other their helmets or knee guards, as they understood that many of the stunts they were carrying out carried high risks – for me all of them did.

These competitions have been held annually for the past seven years with the backing of INDER (Cuba’s national sports institute), Red Bull and the Metropolitan Park.  The park system has offered the competitors free access to practice facilities, while Red Bull has helped the athletes with spare parts, skateboards and accessories for the tremendously popular bicycle motocross event (or “BMX”).  Still, according to youths present, the most expensive pieces of equipment are luxuries way out of the price range of most of their parents. 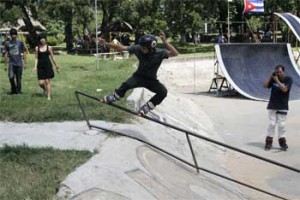 Skates are among those pricier items, though some have been sold here in hard currency stores and one can see a number of kids with them.  However they are not the required for this high-risk competition.  Skateboards are the easiest items to acquire here, costing 30 CUCs (about $33 USD), and like one youth in attendance said, “With some effort, you can pick one up.”

The BMX completion was the preferred and most applauded competition, with rigorous high-risk acrobatics accomplished by these fearless youths.

One thing that caught people’s attention was the absence of young women competing, though among the public in attendance large numbers of them could be seen.  Still, this wasn’t the case on the track.

One could note a growth in the number of followers, who because of their youth depend on their parents to buy the needed equipment.  But this didn’t take away from their enthusiasm in taking to the track and demonstrating their interest in participating in these encounters that unite them.  Forming a community from this common interest, they spent an afternoon of heart-pound thrills, with the most intrepid emerging as the victors in these acrobatics feats.

In BMX – for the second consecutive year, Frank Gonzalez wound up as the champion, with second place going to Armando Ferrer and third to Dani Daniel.