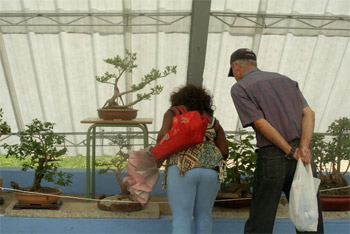 HAVANA TIMES — Cuba’s First National Bonsai Festival was held at the National Botanical Garden in Havana during the second half of July, with the participation of exhibitors, enthusiasts and experts in this ancient art that originated in China two thousand years ago.

Among the activities was a martial arts demonstration on the opening day, as well as a bonsai exhibition, Japanese flower arrangements, a competition among the exhibits and sales of specimen and ornamental plants.

Presentations were also made on the history of bonsai and workshops were given on modeling these trees as parts of miniature landscapes.

The art of bonsai growing involves planting these trees on a small scale, which is achieved with techniques such as transplanting and pruning them in shallow containers to limit their growth.

The National Arboretum has 600 acres with over 4,000 plant species, both native flora and those from other tropical regions.