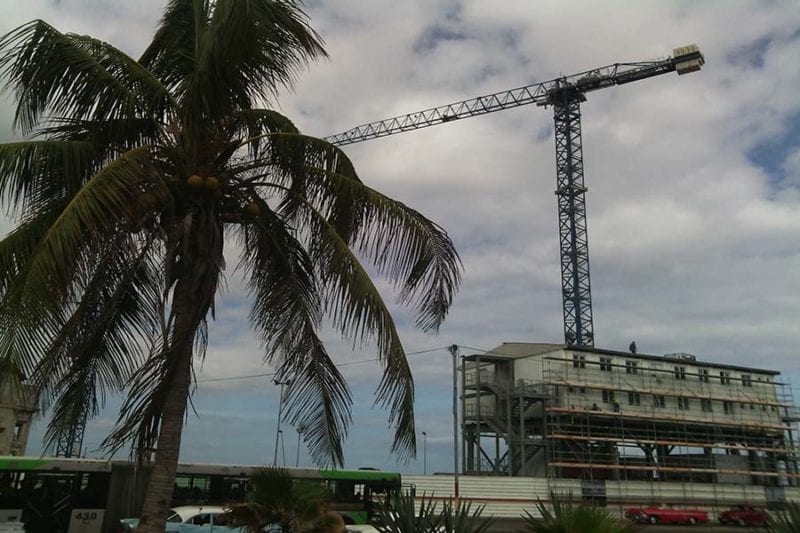 HAVANA TIMES — Cuba’s promising future in tourism can already be seen, the growing avalanche of foreign visitors to Havana is invading its public spaces. Curiosity for the country has meant that tourism has also expanded to more remote places where visitors search for the Cuban people’s daily reality.

Hotel building and repair work in the capital has rapidly increased in recent years, the number of foreign capital investments is comprehensive. The French construction company Bouygues and its counterparty the Cuban real estate agency, Almest (investment company) supported by the Armed Forces (FAR) construction company and the Restaura Company, which belongs to the Havana City Historian’s Office, have come together to take on renovation works. The use of labor from India completes the landscape where the modernization of the old city stands out.

The building frenzy in Cuba, which began with the major restoration of the entire block building known as the Manzana de Gomez and its transformation into the 5-Star Hotel Manzana will be managed by the Gaviota Tourism Group Ltd. (Cuban military), created in 1989, and the German Kempinski Group, which has its corporate headquarters in Switzerland.

The soon to be completed project will have an accommodation capacity of 246 rooms, and will be the most expensive on the island.

Remodeling works are also underway at several other hotels, including the Packard with an accommodation capacity of 300 rooms, the Sofitel SO hotel on the strategic corner of Prado and Malecon Streets, facing the sea, will have 208 rooms, and the Regis Hotel and Gran Hotel, have already begun to be built too. 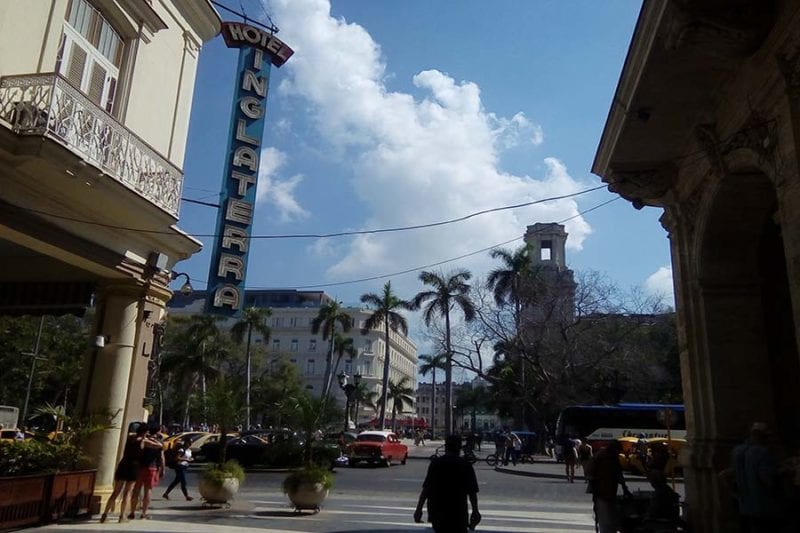 “The 100 Room Hotel” as the Gran Hotel was better known, located on the corner where Teniente Rey, Zulueta and Monserrate Streets come together, has been surrounded by a wall of blocks protecting the original facade, the only remains of the destroyed structure, which was kept upright by scaffolding covered in vegetation. The fleeting work of Cuban graffiti artists used to stand out on the wall of concrete blocks. Today, the surroundings have changed, the old scaffolding has been replaced by new ones which give comfort and security to its workers, a fence covers up passerby’s’ curiosity.

The tourism boom, in part sparked by the Obama administration making it easier for US citizens to visit the island, could be the answer to some of the country’s economic problems, as long as there is an opening in the market where the Cuban people can find work with decent pay.

The United Nations designated 2017 as the International Year of Sustainable Tourism for Development. The basic principles of such sustainability in the tourism sector should consider proper use of natural resources, socio-cultural diversity and business strategies.

A record total of 4.2 million tourists are expected to visit Cuba this year. To meet the lodging needs, the Ministry of Tourism has created an alliance with the private sector, with 17,000 rental homes across the island ready to receive foreign visitors, according to government sources.

12 thoughts on “Capitalist Investments in Cuba”