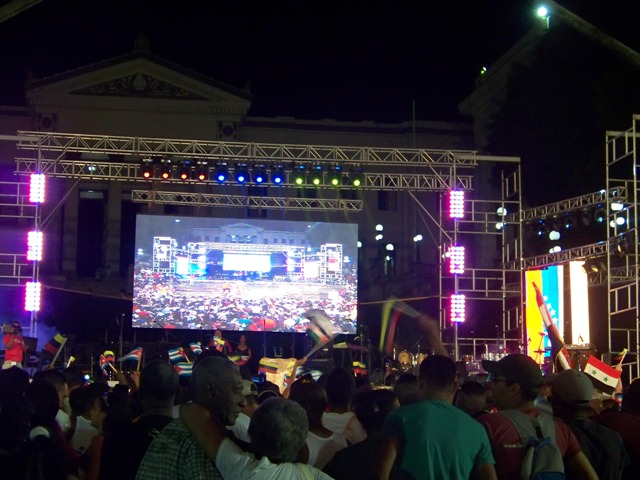 HAVANA TIMES — Sunday evening March 15, at the steps of the University of Havana, a concert took place in solidarity with the people and government of Venezuela, currently involved in a diplomatic conflict with the United States.

The concert was widely publicized by the local media but did not draw the audience expected, especially among the youth.

Amid flags from Venezuela, Syria, Palestine, Mexico, Nicaragua, South Africa, Cuba and others, and lights and large video screens, the event began with speeches from the president of the Federation of University Students, Yosvani Montano, and Cuban Five member Rene Gonzalez, followed by a long boring speech from Ali Gonzalez Araque, the Venezuelan ambassador to Cuba.

Then the concert itself got underway with the music of Raúl Torres, Pepe Ordas and the National Art School (ENA) band.

8 thoughts on “Concert in Cuba to Support Venezuela”