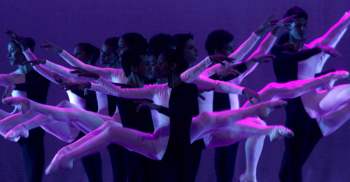 HAVANA TIMES, April 14 — The National Ballet of Cuba and its top dancers performed Wednesday night at a gala to celebrate the 50th anniversary of the proclamation that established the socialist character of the Cuban Revolution.

The Karl Marx Theater in Havana’s Miramar district was the setting for the special performance, just days before the beginning of the VI Congress of the Communist Party of Cuba, which will vote on significant policy changes, some of which are already being implemented to kick start Cuba’s stagnant economy.

With the Bay of Pigs invasion of Cuba already in motion, Fidel Castro proclaimed the socialist character of the revolution on April 16, 1961.

One thought on “Cuba’s Ballet Stars at Landmark Anniversary”