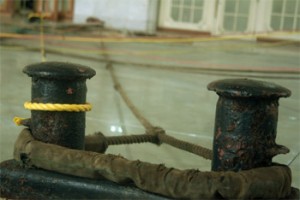 HAVANA TIMES, March 15 — In a hall of the Grand Theater of Havana, Alexis “Kcho” Leyva Machado has organized an exhibition of sculptures and installations that is being visited and admired by numerous members of the general Cuban public and foreign visitors.

Opinions about Kcho’s work have been expressed by many Cuban cultural figures, including Abel Prieto, the minister of Culture at the time of the exhibit’s opening. It was he who said, “Today, in the face of the threats facing the world, when the darkest most disintegrating forces seem to be prevailing, this new exhibition by Kcho expresses the commitment to hope and solidarity around what we are defending in Cuba…”

Miguel Barnet, the president of the Union of Writers and Artists of Cuba (UNEAC), said: “With responsibility and an original expressive power, this creator — who is also the master of his own metaphorical world — is assuming an ideological discourse that is well-known, reflective, delves in the intricacies of life, though such work is often absent in the mass media.”

This photo essay is an attempt to show the most significant pieces in Kcho’s exhibit, on display through April 20.