HAVANA TIMES — Like Highway One in California, the road in Gibara, Cuba hugs the coast through twists and turns as land takes a 90 degree vertical dive into the foamy water bellow.  Waves break over rocks and shipwrecks.

Sight takes precedence over the other senses. The gaze shifts from the ocean to the terrain as the town unhurriedly rises from its perch overlooking its port and fishing fleet.

There is a feeling of abandonment that unfolds when whatever form of transportation you arrived in shuts off.  The silence is abrupt as a gunshot.

I decided to go Gibara on a whim and got there with luck.

My impression of the natural splendor of isolated Gibara was quickly overwhelmed by the feelings of independence and ambitious optimism exhibited by a few of the town’s human inhabitants.

Most entrances to Cuban towns and cities are marked by generic billboards with generic revolutionary slogans and quotes attributed to Jose Marti or one of the Castros.  Not so when entering Gibara.

Starting a few kilometers outside of town there are cement monuments every few hundred meters along the road bearing the likeness, name, and dates of birth and death of fallen soldiers who called Gibara home.

Most striking to me were the number that died in 1988; making the ultimate sacrifice defeating apartheid in Angola.

There is a fork in the road at the entrance of the town.  Veer to the right and you will have the pleasure of passing through a one-way tunnel.  This is how the train used to enter the town prior to suspension of the line the year before the triumph of the Revolution.

Emerging through the other side of the tunnel you will be forgiven if you think the calendar is permanently fixed on that year.

Gibara has earned its independent ambiance. Being so isolated on the Atlantic coast it has bounced back from numberless hurricanes since its founding centuries ago. Most recently it was given a one-two punch by Ike and Sandy. Self-reliance here is not the theme of an official speech; it is a way of life.

Just like the town survives hurricanes it also seems that the Catholic tradition has not suffered for the worse during the years of the Revolution when such worship was frowned upon.

I encountered a brilliantly restored church whose congregation exuded a sense of community. I watched nuns and laypeople chat it up after mass while the youth choir did a post-game rehearsal.

In Havana the church doors are usually closed under lock and key unless there is mass.  The last thing you would want are people getting together, right?

In Gibara the feeling of community is not just confined to the rituals of the superstitious, but is also present in the more artistically inclined.

Across the street from the church is the Jiba movie theater that plays host to the Low Budget Film Festival (Festival del Cine Pobre) every year.  OK, not every year, this year’s event was canceled due to the economic crisis. I guess Gibara’s isolation only stretches so far.

But the nice people at the theater said that the next festival will take place in April, 2014; “probably the second week”.

Aside from low-budget film festivals the town also hosts the Festival of Theater by the Sea, an effort by local thespians and university students from Holguin that I happened to stumble upon while snooping around the theater.

I was told that an International Tango Dancing Festival is in the works for 2015.

The do-it-yourself attitude was just oozing all over the place. As I looked out the window of the theater I thought that the diminutive Statue of Liberty in the town square, with an extension cord running up to the torch, seemed well placed indeed.

And don’t think for a minute that that extension cord is plugged into an old oil powered electric plant. There is a modern wind farm on the west side of town with a couple of dozen turbines churning away.

The other reminder of modernity, besides the wind farm, is the optimism surrounding the growing tourist industry. Cubans have been used to renting out their homes as “Casa Particulares” for many years now. The big new thing in Gibara is the Hotel Ordono.

Resurrected from the home and warehouse of the town shipping magnate, Senor Ordono, from the 19th century, this 20-something room boutique hotel run by Cubanacan is the only hotel I have seen on the island that deserves all four of its stars.

After a bit of chitchat with the receptionist I was being given a tour of the place, top to bottom. 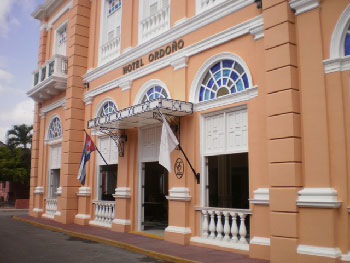 The rooms all have king sized beds and impossibly high ceilings. The biggest rooms are the former kitchen and the master suite.  The latter is complete with restoration of the bathroom fresco that dates from the original construction of the building; painted by some Italian artist that the former owner had boated over from Europe.

Right now, just like that bathroom fresco painter, the only tourists frequenting the new hotel are Italians on one-night package trips from Playa Guardalavaca on Mondays and Thursdays. This is probably why I found it completely empty during my impromptu tour.

The optimism around tourism is present in other parts of the community as well. A number of private restaurants (Paladares) have sprung up.  I enjoyed more fish than I should have eaten at a restaurant called “Las Terrazas” (the locals all call it “Michael’s place”) for about four dollars.

Even though the place was busier than it should have been for such a quiet, out of the way town, the waiter happy answered my question between mouthfuls of tastiness.

The market agrees: Gibara is a buy.

During my brief visit to Gibara I breathed an air of independence and optimism that I have not easily encountered in other parts of Cuba.  I was left with a pretty good first impression of this small town at the end of the road.

5 thoughts on “Finding Optimism and Independence in Gibara, Cuba”