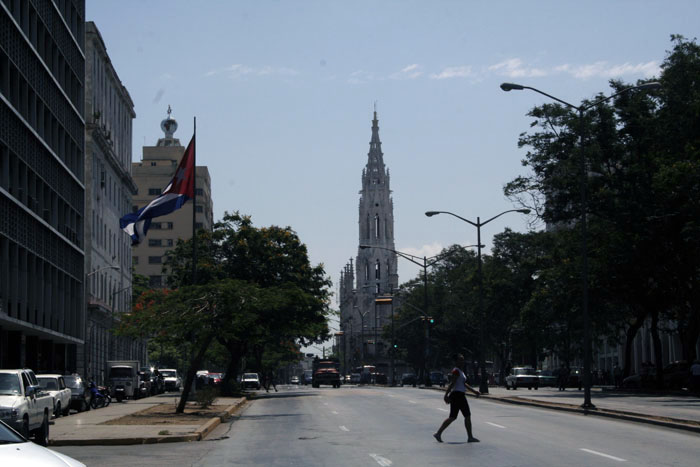 HAVANA TIMES, May 29 — In 1907 the idea was born that the Jesuit fathers in Havana should have a church dedicated entirely to the exercise of their ministries.  This aim emerged under the rectorship of P. Vicente Leza, at the old Belen High School, back when the principal duty of the school’s priests was to see to classes and the functioning of that educational center.

The first stone was laid on August 7, 1914, and the building was inaugurated on May 3, 1923 after being solemnly consecrated the day before by Bishop Monsignor Pedro Gonzalez Estrada.

The church and the residential annex were constructed in the Gothic style, whose idea and execution was led by H. Luis Gogorza, S.J.  The altar, which is a true artistic marvel, was designed and constructed in Madrid by the Father Granda.

The principal founders were four wealthy Havana families: those of Mrs. Maria del Carmen Zozaya, Mr. Francisco de la Valle, Mrs. Francisca Grau (“Doña Chichita”) and Mr. Narcissus Gelats.  These people contributed to erect the most beautiful places of worship in Cuba and one of the finest in all the Americas.

The church continues to be one of the most beautiful buildings in Havana today and is directed by P. Luis Fernandez, S.J.

One thought on “Havana Sacred Heart of Jesus Church”