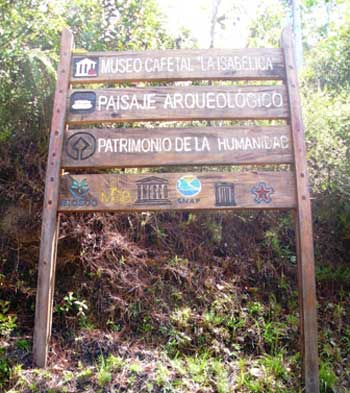 HAVANA TIMES, April 14 — Close to the massive Gran Piedra rock formation in eastern Cuba, is an area settled by French colonists in the 18th and 19th centuries. Here they developed coffee plantations of paradigmatic vernacular and industrial architecture, though what remains today are, for the most part, the ruins of dozens of those estates.

These vestiges, consisting of stone mansions and coffee drying sheds, constitute the Franco-Haitian imprints on this region. What endures as the most outstanding exponent of this is the old “La Isabelica” plantation, which currently functions as a museum testifying to the history of Franco-Haitian immigration to Cuba.

Inagurated as a museum on May 18, 1961, it was declared a National Monument on November 29, 1991 as well as a World Heritage Site in 2000, along with the entire group of other coffee plantation ruins in south eastern Cuba. Of this collection of former plantations, La Isabelica was restored and now serves as the only museum of French coffee plantations on the island.

Initially owned by Frenchman Victor Constantin Couzo, 598 objects related to Franco-Haitian immigration are on display in 17 exhibition halls on the grounds. The main building, which served as both the owner’s house and as a production area, is divided into two floors. On the ground floor were the storage rooms, while the family home was on the second floor.

On the lower floor is a room containing household and agricultural tools as well as those used to punish the slaves. Also on the ground floor is a coffee depository, a machine room with a coffee bean de-pulper and winnower. Close by is a hole in the ground used to protect the future offspring when whipping pregnant slaves.  Also displayed on this floor are the coffee driers, the kitchen and the pantry.

The upper floor is laid out with a sundial, a bell and the beautiful manor house possessing a magnificent hydraulic system. With a single entry and exit, the home possesses majestic living rooms and a dining room adorned with luxurious furnishings of the epoch. In an area surrounding the main house were located the slave quarters and a latrine.

The walls, stairs and other items within the main house add to the majestic view of the area surrounding the property. Meanwhile, the engineering of the hydraulic and conveyor systems indicate how the early settlers took advantage of the space and the mountainous topography.

According to historical accounts, as a result of the Haitian Revolution, French colonists fled to Cuba trying to save not only their lives but also their wealth.

Such was the case of Victor Constantin, who availed himself of the area’s fertile soil for growing corn, cacao and coffee.

With him, Victor brought the beautiful “mulata” Elizabeth Mary, and out of his love for her, he named the plantation “La Isabelica.” Logs indicate that he owned a total of twenty-five slaves, which included his mistress, since on paper Isabel Maria never ceased being a slave.

“Don” Victor, after having enjoyed his newly built empire and fortune, met with misfortune in 1875 when the Cuban Mambi Liberation Army set fire to the property, plundered the house and destroyed the plantation. All of this sat in ruins until 1961, when it was converted into a museum thanks to an extraordinary restoration effort.