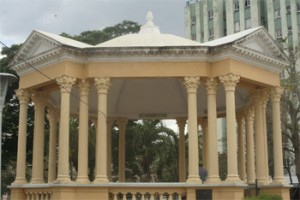 HAVANA TIMES — In the center of the Santa Clara City, in Villa Clara Province — in the heart of Cuba — is the Leoncio Vidal Park Caro, a national monument.

According to the opinions of many experts, this is one of the most beautiful parks in Cuba, and is surrounded by buildings of eclectic architecture, along with more modern ones.

Prominent among the buildings circling the park is the La Caridad Theater (also a national monument), the Jose Marti Library (formerly the provincial government headquarters) and the Hotel Santa Clara Libre, among others, which all lend a unique beauty to the environment.

In the area occupied by the plaza, one can see the arbor where the municipal music band enlivens the evenings. One can also admire the “El Niño de la Bota Infortunada” fountain, along with a bust of the benefactor of the city, Marta Abreu de Estevez.