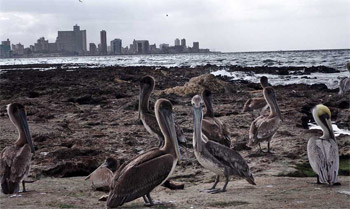 HAVANA TIMES, Feb 25 — The beginning of the year is my favorite period. It’s not because of the “Epiphany” holiday, nor because we’re celebrating yet another year of our system. It’s not because with January and February come — according to our calendar — a new year.

I think it’s because of the cooler breezes, ones that come full of pelicans and that help freshen thousands of little yellow flowers. It’s like the world were made in only two colors: blue and yellow. It’s as if Van Gogh had taken command of those months of January and February.

There are no languishing sighs of torment from the heat, no pressure on people in the streets to rush around buying gifts or food for the end of the year, and no patriotic celebrations. There are only the waves that crash and the birds that migrate.