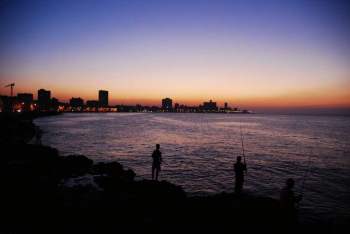 Leaving Caracas was not as joyous as I thought it would be; to say anything else wouldn’t be sincere. Although by the beginning of January I was going stir-crazy wanting to finally return to my Havana, when I least imagined it I stumbled onto love in one of those plazas full of pigeons, like the kinds in melodramatic romance flicks.

But being in love is not matter to go around talking about. Generally, people who are not experiencing that state aren’t so interested about hearing the details about the initial eye contact, the first kiss or an evening under the stars.

This was the way I boarded the airplane, saying nothing with respect to this. There were tears, but not exactly from the emotion of returning. In any case, no one will believe me when I say that I was desperate to walk through the streets of Havana.

Even though they look exactly the same after my being away for a year, I’m twice as thankful for their vivid smells, for the cool March breezes that flow through the narrow streets, for the horizon that’s always open and for the blue almost cloudless sky. But something was missing.

Yes, what I left in Caracas. 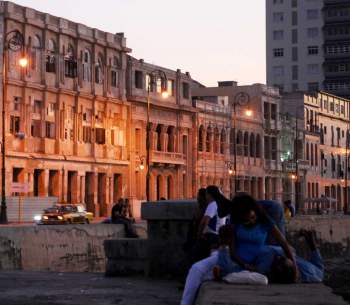 In the meantime, I’m consoled by the sea and entertained by the night. Too much time has passed without my being able to enjoy this, the Malecon seawall, on a strangely quiet evening as peanut vendors pretend to walk by unnoticed.

Men stand glued to their fishing poles, as if they will never detach themselves from the reef, as if they had no hope of hooking any fish but as it were enough for them to be here every evening.

In the distance, a voice comments to passersby that he doesn’t need to leave Cuba. He says he likes this country; here he’s an important figure. I don’t have to look at him; I know he’s the same man who approached before I sat down on the Malecon wall. He wanted to know if I had any matches, which in reality meant that he wanted to hear my accent to find out if I was Cuban or not. That fact could have been decisive for beginning a conversation with me.

I feel alone on the Malecon wall and I look out at the sea, which is giving me signs…but I don’t want to understand them, at least not for the time being.