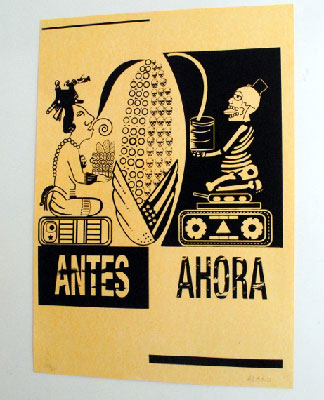 HAVANA TIMES — Scholars have traditionally thought of posters as a form of commercial communication designed to announce, promote or sell products and seduce buyers. We have just confirmed, however, that they can tell a different story.

Until the close of May, posters which invoke legends drawn from the folklore and popular myths of Mexico, New Zealand and Cuba will be on display at an exhibition held in the Espacio Abierto Gallery of Cuba’s Revolution and Culture (Revolución y Cultura) journal.

There, you will learn of the causes behind the extinction of the Huia, birds whose beautiful dark-green, white-tipped plumage, once part of the decorative dress of maori natives, became a fashion in Europe.

Or about the falsity of the slogan “100 % Pure New Zealand”, a misleading advertisement which neglects to mention that the country consumes over 85 % of the world’s supply of the poisonous 1080 gas (sodium monofluoroacetate), banned almost everywhere around the globe, the deforestation of soils caused by the livestock industry and the emission of high volumes of carbon dioxide – owed, among other things, to the fact that there are as many automobiles as people in New Zealand.

You can also get the story behind Mexico’s “wretched night” of 1520, in which over 600 Spaniards drowned after kidnapping Montezuma and pillaging his palace (the heavy armor and stolen jewels made them sink as they fled, we learn).

You probably didn’t know that, since 2006, Mexico has a Virgin of the Barricades, which you can find stenciled on different walls in the town of Oaxaca. At the exhibition, you will have a chance to read the prayer devoted to her.

The story of Matías Pérez is one of the popular Cuban tales explored by the posters on display at the exhibition. In 1856, this Portuguese businessman, settled in Cuba, built his own balloon, flew across the city and managed to land, only to rise once more and never again be seen. The phrase “he/she flew away like Matias Perez” has been re-contextualized and is today employed to refer to Cubans who, after leaving the country, are never heard from again.

“Busted like Cafunga” is another popular Cuban phrase invoked by the posters. Though it has suffered a number of variations over time, the phrase refers to the manner in which Cafunga, a freed black man who cut and collected palm leaves for a living, plummeted to his death from the heights of a palm tree. Today, the idiom is used to announce that someone who has committed a crime has been caught, “busted”.

The exhibition, held on 4th St, between 11th and Linea streets, Vedado, also affords us insight into myths surrounding maize, ceiba trees, the life-death dichotomy, the poisonous plant known as Guao and the use of the word “God” to manipulate people or conceal ill intentions.

The Espacio Abierto gallery is open to the public from 10 a.m. to 5 p.m., Monday to Friday.