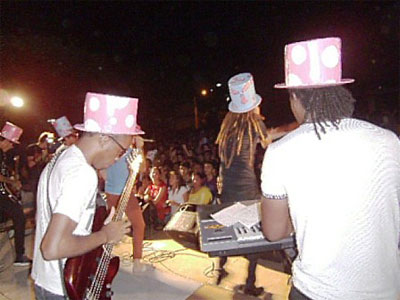 HAVANA TIMES — With its infectious beat and sui generis look, including the use of large colored hats, Qva Libre had young people dancing and enjoying themselves at the Universidad de Oriente in Santiago de Cuba on April 2.

Qva Libre began a nationwide tour last Saturday with a concert on the steps of the University of Havana.

The alternative music or Timba-Rock band, emerged in 2000 under the direction of Carlos Diaz (guitar), Giordano (bass) and Frank (lead vocals), with the aim of fusing rock, funk and hip hop rhythms and roots of Cuban music.

The group takes the musical heritage of the 70s and 80s and provides a bridge between the cultural and the language used by urban Cuban youth.