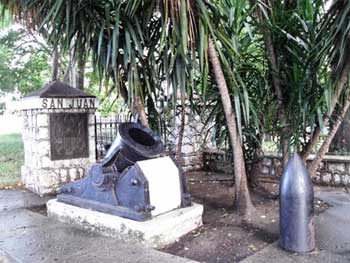 HAVANA TIMES, March 23 — This photo report needs to talk to the readers a little bit about the struggles of my country since the site being featured is a landmark park that was the scene of one of the most important passages in the history of Cuba.

The wars of liberation for the island’s independence from Spanish colonial rule began in October 1868 with the “Ten Years War,” when the “Mambi Liberation Army” was created and declared the “Cuban Republic in Arms” across the insurgent nation.

This war ended after a decade due to seditions, caudillismo (warlordism), negligence and the event known as the Zanjon Pact, whereby most of the rebel troops submitted to a peace treaty with the Spanish army.

That action met with strong moral indignation with the “Protest of Baragua,” carried out by Major General Antonio Maceo, who would not accept peace without independence and continued to fight in the manigua* (the back country). Nevertheless, despite that epic feat, the Ten Years War had ended.

There were other attempts to reinitiate the struggle, such as the “Little War” and isolated actions, but it was not until 1895, when the Cuban people again rose up after a long period of reorganization.

This effort was led by Jose Marti, who was given the task of organizing the war in all aspects, founding the Cuban Revolutionary Party, recruiting the former generals and collecting the necessary funds in exile, among other tasks. 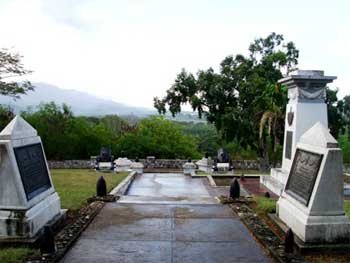 Three years after the outbreak, in 1898, when the victory of the liberating army was imminent, US troops intervened in the conflagration and made it seem as if the war was won thanks to their involvement.

Since then, this stage became known as the “Spanish-Cuban-American War,” which ended Spanish rule but turned Cuba into a US colony under a pseudo-republican government.

San Juan Hill, located in Santiago de Cuba, was the place where one of the most decisive battles in ending the war was fought. Here, the peace treaty was signed between the Spanish and Americans, though the major general of the Mambi troops, Calixto Garcia, was not allowed to participate, despite the fact that it was his troops that played the decisive role in the victory.

On this hill are monuments and obelisks to the Mambi soldiers and even to the US citizens and Spanish soldiers who fought for the liberation of Cuba.

Canons of the epoch, tombstones, a bronze replica of the letter of rejection from Calixto Garcia to US General Shafter, as well as the ceiba tree called the “tree of peace” (in its place was planted a new tree since the original one died a few years ago) are the elements that visitors can see in this landmark San Juan Hill Park.