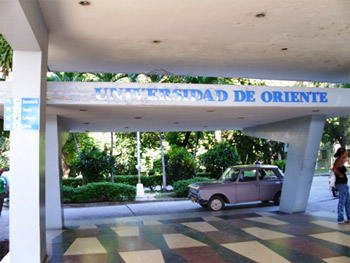 HAVANA TIMES, Nov. 26 — Many professionals have graduated from the Universidad de Oriente in Santiago de Cuba. The university was founded on October 10, 1947 as the second largest institution of higher education in the country and the leading one in the eastern region.

The school’s genesis can be traced back to the San Basilio el Magno seminary, founded in 1722. Generations of Santiagoans tried unsuccessfully to convert that seminary into a university. The college’s creation in 1947 was the realization of those old hopes, efforts and cultural dreams that had existed for over a century in eastern Cuba.

In April 1948, the university was provisionally recognized by the Council of Ministers. From that moment on began the struggle for its official recognition, which was required to ensure its development.

The call to make it a public, independent and official university grew into a demand by the province through governmental, social and labor institutions, civic groups and the people in general. Under Law No. 16 of March 22, 1949, its status was formalized and the institution was included in the nation’s budget.

Originally the school had a core of careers in the humanities and the sciences, of which several remain as legacies of the founders and other figures of those earlier times. Oriente had been, along with the University of Havana, the two most important university centers of study on the island.

Today the university has three campuses:

The Antonio Maceo Main Campus: This is the site of the faculties of Social Sciences, Humanities, Law, Economics and Business, Science, Mathematics and Computing and Distance Education.

The Frank Pais Campus: Here are housed the faculties of Agriculture, the “Grade 12 Project” (El Proyecto de Grado 12), and the Software Development Center.

Across the university are various architectural styles, since its buildings were built at different historical stages. However nothing is more striking than the Rector’s Building, built in 1956. This structure emphasizes its exalted position and its large dimensions. Separated from the road system, the distance is economized with vehicular access protected by a large canopy that emphasizes the building’s main entrance. Its flat quality is simple, retaining an elongated rectangular shape.

The construction was executed with a horizontal predominance, with the building connected by ramps and stairs that connect the lower levels. This is all delimited by frames of large panes of glass in horizontal bands that rest on a base surrounded by expressive gardens; these are protected by moving components consisting of clay lattices, glass clips and fine enclosed plaster walls.

A mural created in 1996 by the “Internos Project” (a collaborative effort between German and Cuban artists) helped to make the Universidad de Oriente a visually stunning institution.