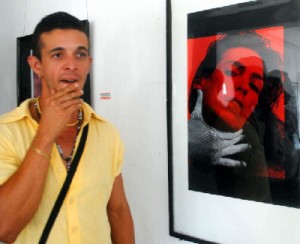 HAVANA TIMES — The Fayad Jamis Art Gallery located in Alamar, Havana, recently opened an exhibition entitled The Same or Different? (¿Iguales o diferentes?) as part of Cuba’s Day Against Homophobia activities. It will be on display through June 19.

In the municipality of Habana del Este (where the neighborhood of Alamar is located), there is a large LGBTI community with unique characteristics, stemming from its relative geographical distance from the city center and the diverse nature of the area’s inhabitants.

We must therefore work hard to educate citizens everywhere, so that they will respect diversity and a person’s freedom to choose his or her sexual partner. And this is precisely what the Fayad Jamis Gallery sets out to do through its activities: to eradicate homophobia by giving visual expression to and attempting to overcome gender-related forms of violence or discrimination.

During the inauguration of the exhibition, writer and social researcher Pedro Perez Rivero gave a talk on sexual orientation and identity, addressing the issue of homoerotic relations and their clash with allegedly antagonistic identities.

He posed and tried to respond to a number of interesting queries, such as why beautiful women are most often associated with heterosexuality and how a black, homosexual man is perceived by society.

The author believes one of the most dangerous of social myths concerns lesbians and the issue of maternity. This myth, expressed in TV series and soap operas in many different ways, helps consolidate the erroneous belief that lesbians are inherently opposed to having children.

The exchange, enlivened by anecdotes, stories and interesting information, turned into a debate when one of the gallery employees expressed a concern: Could the struggle for the social integration of homosexuals, with which he agrees and supports, wherever possible, encourage a trend towards same-sex couples among the young that could undermine the family as an institution? 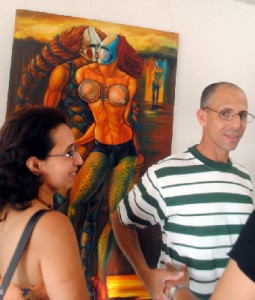 The audience (mostly made up of homosexuals) was quick to reply. Respectfully, raising their hands to request the floor, many of them spoke of acceptance and tolerance.

Should we speak up whenever we hear discriminatory comments, be it at the grocers’ or in our places of work? Are we willing to take on this daily activism, even if it means offending some people?

Participants arrived at the conclusion that ensuring tolerance may have sufficed at one point in history, but that the times call for more profound changes in mentality, that tolerating differences is simply not enough today.

Most of those present, however, also felt that the word “acceptance” was inappropriate, for no one should be obliged to accept another if they do not like the way they are or think. In the end, everyone agreed that we must work to secure respect towards diversity, be it sexual, religious, racial or political.

The Same or Different exposition affords us a fresh look at homoeroticism through a series of conceptually innovative and imaginative paintings, drawings and photographs.

What’s novel is the attempt to offer support to Cuba’s campaign against homophobia from the municipal level, through spaces where more intimate debates about these issues can be held with common, everyday people, the same people who are shocked to see a lesbian in a Cuban soap opera or yell all sorts of profanities at a transvestite when they walk by.

The Fayad Jamis Gallery is located on the intersection of Avenida 164 and B, in Alamar’s Zone 7. It is open Monday to Friday from 9 am to 5 pm.