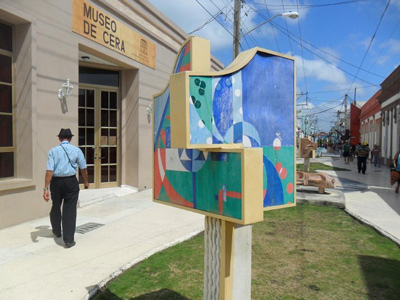 HAVANA TIMES — All the people I told I would be visiting Bayamo, Granma agreed I would like the city.

Located on General Garcia street, Bayamo’s main boulevard has many charms. In addition to being in excellent condition and boasting an enviable cleanliness, the place is home to a broad variety of commercial and cultural establishments. Below is a list of everything I saw during my brief stroll there:

Two ice-cream parlors, one for children and one for adults
An aquarium
A hamburger place
A cultural center (called 500 Aniversario, “500th Anniversary”)
A wax museum
A vegetarian restaurant
A place that sells rissoles
A piano–bar
A radio broadcaster
A place where juices and fruits are sold
A bookstore, where I purchased Los placeres del exilio (“The Pleasures of Exile”) and The Conspiracy of Equals.

We had traveled to Bayamo to take part in the Primavera Teatral (“Theatre Spring”) festival, so we of course also saw a number of plays.

The Bayamo theater, inaugurated in 2007, is a spectacular venue. Though it is a large, comfortable establishment, it is a tad distant from the heart of the city. I am sure this is why there were so few people there the day we saw Mama (“Mom”), staged by the Alas D’Cuba company.

The play, directed by Fernando Muñoz, explored a dictatorial mother-child relationship that unfolded in a dark, incestuous place removed from the world.

The struggle arising from the rebellious nature of a daughter and the submissive attitude of a son prompt reflections about madness, love, fear, overprotectiveness and, of course, freedom.

Another surprisingly nice theater is the Jose J. Palma. It isn’t as big as the Bayamo Theater but is equally special. In this same theater, we saw another play, written by Freddy Nuñez Estenoz, Lo que te voy a contar (“What I’m About to Tell You”).

The play is a re-staging of Cinderella in which the main characters are free black people from colonial times that enjoy a fair degree of social recognition.  The actors, members of Ciego de Avila’s Polichinela theater company, use a series of puppets in a spontaneous, free and dynamic way, making the audience (chiefly made up of children) laugh on more than one occasion. That said, I believe a number of the play’s details ought to be reconsidered, because the story reproduces stereotypes about black people at some points.

Another day, when we had a bit more time, we visited the painting exhibition at the 500 Aniversario gallery and then headed down to the wax museum.

The museum doesn’t house all that many pieces, but those on display are well made and realistic. Their authors, a family surnamed Barrios, are self-taught artists who live in the municipality of Guisa. The museum opened in 2004 with a number of desiccated animals on display. In 2007, it incorporated its first human figures to the collection.

There, we saw musicians, writers, patriots and the victims of sabotage (the Italian tourist Fabio Di Selmo, who died in the bombing of a hotel) – a total of 14 wax figures set up among desiccated animals (most of them winged).

Talking to people, we found out they are planning to include more women in the collection, but that the decision does not depend on the management by rather the municipal government. The way I see it, that is unjustified. If the museum has its researchers and experts, there is no reason someone from outside the museum should have the last word.

10 thoughts on “Things to Do in Bayamo, Cuba”