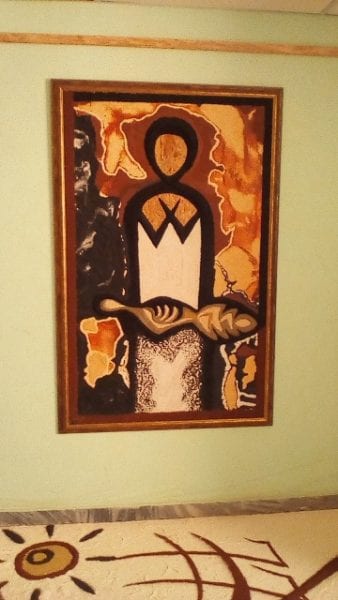 HAVANA TIMES — A temporary art exhibition was put on display at the ICAN (Cuban Institute of Anthropology), as part of the IX International Colloquium on Research of African-Derived Religions.

Followers of the arts, belonging to the Ennegro Experimental Project of Palma Soriano, Santiago de Cuba, for whom Vodou is the spiritual foundation on which life is grounded, presented their work under the title “Trazado sobre la Tierra” (Mapping on the land) to Colloquium attendees and guests. Their art is based on this religious belief which was born in Haiti, and which took root in Cuba due to the wave of immigrants coming from this country, who settled in the Cuban East.

This exhibition tries “to visualize Vodou via symbols and figuration”  “we are from the Cauto riverbank (…) that’s where the Yarayabo and the Cauto meet (…) Vodou is breathing (…) The Cauto River is the longest river in the East and the Cauto’s waters spread the energy that lies there, because we want it to be seen in everything we do…” argued Camilo Rivero in the presentation.

Behind the entrance door, a space was dedicated in honor of the spirits who live together there, so as to prevent trouble and obstructions; something which is often present in some other African-derived religions.

From cosmogeny which supports the meaning of Vodou followers’ actions, an allegorical space was set up, as if a part of the Fourth (Temple) which holds the sacred had been moved to the ICAN, where the rituals which are part of this cult were held and still take place today and after the exhibition opening ceremony.

Even though you could only recognize figurative art, followers of this faith would have likely claimed that the Loas spirits were present, where Papito Milanes (Ugan, the general director of the Project and sculptor) carried out his rituals, where he involved a group of attendees. 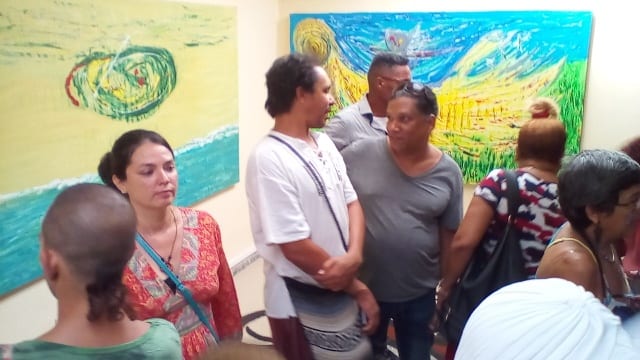 Some works were made using natural substratum – different kinds of soil – in the case of tapestries, which were complemented by chromatic works in painted frames.

The conjunction of art and religion in the symbols which the artists contributed from their own experience in the religious ritual, bring them closer to the earth, to colors which can be seen in the changing of the seasons, smells, tasting the libations and the encounter with the Loas spirits.

The earthly life of the Loas spirits is depicted in these works or, at least, the human perception of them is presented, about their presence in the world and essentially Vodou believers. They were shown so that people could “… perceive (…) the energy, the stability, the strength and the power that it has…” concluded Virgen Maure Lopez, in the opening ceremony.

NOTE: The explicit authorship of each piece is unknown as all of the artists worked together on some pieces, recognized as collective art, but you can see the active component of each artist in some pieces.