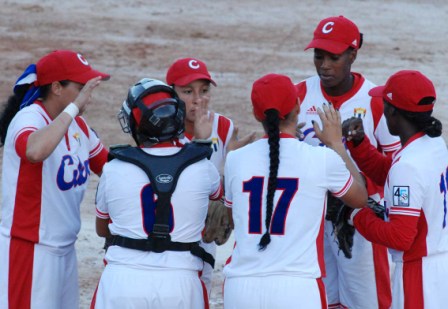 While the planet is being turned upside down by the Soccer World Cup in South Africa, in another southern region —that of the Americas— another world championship is taking place.  This competition is in the discipline that in 2008 was eliminated as a sport in the upcoming 2012 London Olympics and 2016 Rio de Janeiro games: softball.

“Long live the women’s competition!” is the motto that kicked off this current twelfth championship, which started on June 23 in Caracas, Venezuela.

For the first time an ISF Women’s World Championship is being held in Latin America.  Among its main objectives (which I would summarize had I the right to do so, but it seems that common people don’t count when it comes to making major political, economic, cultural or sports decisions) is to demonstrate to the International Olympic Committee (IOC) that softball —as much as baseball, squash, karate and skating— does in fact deserve a place in the 2020 Olympics.

The official mascot is Sofi, a cat elected by the players of the Venezuelan national team, and whose name is the reversed acronym of the International Federation of Softball.

Teams from Argentina, Japan, Canada, China Taipei, Holland, Great Britain, South Africa and Cuba are competing in Group A; while the United States, Australia, China, Venezuela, New Zealand, Botswana, the Dominican Republic and the Czech Republic are facing off face in Group B.

Although Cuba is now out of the play offs, having lost four of its seven games, I thoroughly enjoyed their play.  The team from my country hadn’t participated in the world softball championships in 20 years, though I don’t know the reasons why (I hadn’t even ever sat down to watch a softball game before).  It could have been that this sport with women wasn’t shown on television a lot.  It’s likely, but I can’t say for sure.

What is certain is that they got few hits off of the teams with better pitchers, though they had a defense that must be the envy of the Canadian and US squads, two of the best teams at the world level.

The first night that Cuba played, we went to a small stadium, one of those on the grounds of Tiuna Fort, a military installation in Caracas that has provided its stadiums for this event.  A small stairway for electricians enabled me to go up on the roof above the dugout of the Cuban team.

From there I discovered something I had always wondered about; how Cubans feel who are able to go to a game outside the island.  I had seen them in the stands on TV, in some of the many world competitions that are broadcast on our sports channel.  There they were, with their Cuban flags, Chinese cornets and congas.  I wondered where all the Cubans who showed up for that game had come from… Never mind, it was a question that was a little (or a lot) naive.

Later I wondered if I would ever be in the same situation as those Cubans, supporting my country’s team in any sporting event; I had always doubted it.  But destiny or luck is crazy (and in my case, I can assure you that my luck is VERRRY crazy).  So there I was, not among the public, but in fact taking pictures of a sport quite similar to baseball.  But the fact was that I had never taken a shot of either of the two in my life.  So they were two experiences in one.

The stands were full of Cubans and Venezuelans who were rooting for our team over the Canadians, who at this moment are contenders for the gold or bronze medal.

The Cubans in the grandstands were no mystery to me, because there are thousands of Cuban doctors, teachers and specialists of several fields working in Venezuela.  As the game began after 8:00 at night, work had already ended, so there were T-shirts from the World Softball Championship as well as from the Cuban-supported “Bolivarian Missions” (social, health care, educational and other social programs).

In fact is that it’s been a long time since I’ve been interested who winds up winning some game. If I’m in the mood to watch one, I will.  I’ll scream, have a good time and even curse… as long as the game lasts.  But I really don’t care who wins.  Like the character in a Cuban movie Diario de Mauricio said, “Nothing’s going to change as the result of a game… even if it’s about winning the gold in the Olympics.”  Nothing’s going to change.

So, this was how I enjoyed my first chance to root for my team in a game off the island… though they didn’t even realize I was there.  The captain of the team, Maritza Toledo, said in a press conference that night that all of them were crazy to return to the island, as were all the Cubans who came to the stadium to cheer them on.

I’m also looking forward to returning to the island, whether the Cubans win or lose.  But I have to wonder why they were more anxious about returning to the island than winning their next game.  Maybe they felt defeated ahead of time?  Our team was on the rise in each game – win or lose.  I wish them the best of luck, because they’ll need it – as will the rest of our athletes.