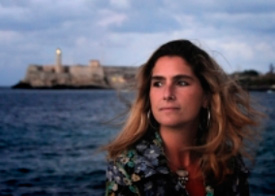 We continue interviewing Marina Sitrin, a researcher and activist from the US. “The idea that we can make revolutionary change by taking over the state and then achieving liberation does not resonate with people anymore.”

We bring you part two of our interview with Isidro Estrada, a Cuban who has spent the last 15 years living in China. He gives us insight on the country often looked on as a model by the Cuban government, trying to kick-start a stagnated economy while at the same time maintain power.

Isidro Estrada traveled in 1995 to China for the first time, courtesy of a contract with the Xinhua news agency to proofread the Spanish news. Following six years of work there, he returned to Cuba, but in 2005 he went back to China on his own. He currently resides in Beijing with his Chinese wife. We interviewed him on a visit to Havana at the end of 2013.

The documentary OFF_LINE would have been released earlier had the filmmaker not had to wait for an interview, which was ultimately never granted. Finally, the crew decided to release the film through the island’s flashnet, as the trafficking of digital materials via USB (flash) drives – in a territory that continues to be mostly offline – is referred to in Cuba.

“People organize and seek new forms of collectivism when those that exist don’t meet their interests. I consider myself a part of that process,” Esteban Morales, economist and a specialist on hemispheric policy, told HT.

Today I learned about the death of Bradbury. The writer, 91, was one of my Russian mother’s favorite science fiction creators. For me he illuminated key moments in my life – childhood, adolescence and youth.