German Ramirez reports from Bergamo, in northern Italy, that the coronavirus is “out of control” and that a quarantine “will be prolonged.”

HAVANA TIMES – The images of a funeral caravan of military trucks crossing the streets of the city of Bergamo and of hospitals overwhelmed by hundreds of seriously ill patients, have caused a commotion in Italy and the world.

With more than 50,000 affected and over 4,800 dead, this past weekend Italy already surpassed China in the number of fatalities due to coronavirus, and the epicenter of the epidemic is in Bergamo region in northern Italy, where the majority (more than 3,400) of the dead are registered.

Nicaraguan German Ramirez is a 42-year-old marketing and advertising professional, married to an Italian woman and the father of two young children, who is quarantined in Bergamo, a city of medieval origin located 40 kilometers from Milan.

“The epidemic continues to grow,” he explains with distress in a Skype interview on the television program “Esta Semana” (This Week). “It is expected that in ten more days we will reach the peak, and we do not know how long this situation will last.”

Bergamo is in northern Italy, in an area that has first-world health services. How was this epidemic unleashed?

It is something that really is still not known for sure. It all started in a small town near Milan, called Codogno, and from there it has spread throughout the Lombardy region, which is the most affected in Italy.

How many people have been infested, and how many deceased are there in the Bergamo region?

In the province of Bergamo, which are one million one hundred thousand inhabitants, there are 4,600 infested through today (Friday, March 20), but this continues to increase every hour.

They do not publish the data (of deceased) by city, only by province, and we are currently at a figure of 3,405 deaths, only in the province of Bergamo. 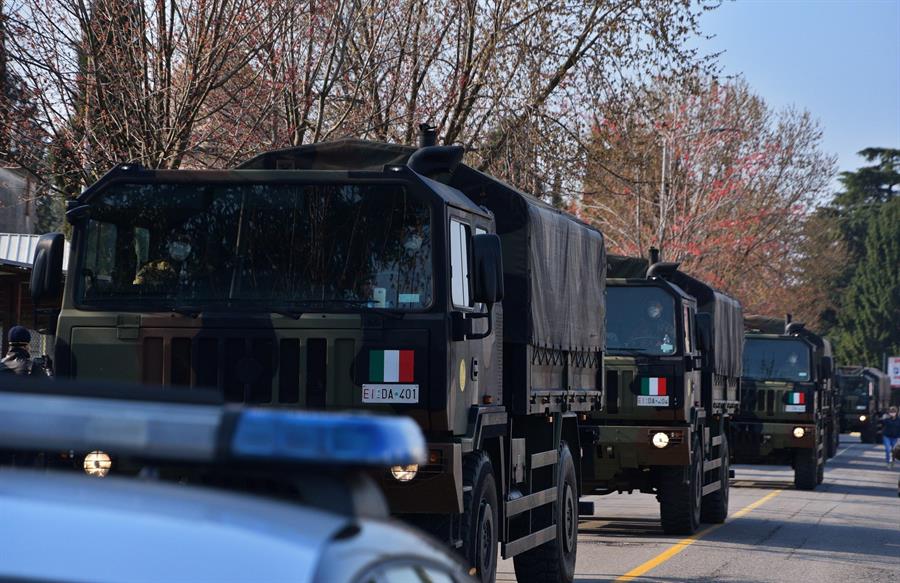 At what point did the authorities recognize the epidemic and take actions? Because the spread means that several weeks passed without any preventive measure being established.

Yes, one of the complaints towards the Italian Government is its mismanagement when this was discovered and with this type of contagion, it is very important to detect the one who is infected, patient zero, patient one, and cut the chain of infection.

From there the whole problem began. Healthcare in the northern part is better compared to all of Italy. Well, some of it, a somewhat debatable question is how this whole problem ended up here.

What were the measures finally adopted by the Government? At this moment you are living under a quarantine, since when?

There have been several stages. The first one was since February 24, when the closing of schools, universities, in the Lombardy region was decreed. This subsequently was followed by the decree to close all schools in Italy, and later we reached the period of complete quarantine where all commercial activity of the entire country is closed. Since then restrictions have increased, border closings have come, people are not allowed to enter or leave. Currently everything is paralyzed except for pharmacies, supermarkets, banks, nothing else.

What is your daily life like? That of your wife and your children? Can you leave your home?

You cannot go outside if it is not for an extreme necessity. You are allowed to go to the supermarket, go to the pharmacy to get medicine, assist elderly relatives. So, most of the people do grocery shopping online, but they put you on a waiting list.

I am the only person who leaves my house, and I go every three days to the supermarket, which I have here in the neighborhood practically. I go on foot. I have to go with a pass where I declare where I come from, where I am going, and for what reason am I moving. There are many police on the streets. If they stop you, they check you, they require a pass, self-certification, and verify the assertion. If they can prove that you are lying, you get a fine for the first time, and after the second fine, they have the right to a criminal charge. In other words, there are strong controls, but even more are needed.

Among your Italian relatives, your wife’s relatives, is there anyone who has been affected by the virus?

Yes, my wife is from Bergamo, her whole family lives here in Bergamo, and at present there are three relatives that we have admitted in the hospital, and they are her two cousins and an aunt who are admitted, who have tested positive.

But the measures that the state has adopted is quarantine. Has it been effective or not? And I ask you that because this week there have been funeral processions in the city of Bergamo of military trucks, and the news is that there are still people who could not even be buried, and that the hospitals are being overwhelmed.

So it is. Unfortunately, that image of the Army trucks was two days ago, it has been a very important moral blow for the whole city, for all of Italy in general. The problem is that hospitals are no longer able to cope, you cannot keep all the dead there. So, churches, funeral homes are being enabled, both for the construction of hospitals and for the storage of the dead, but they do not allow bodies to be handed over to family members, they are simply told that their family member is dead and they are cremated.

The quarantine established at this time lasts until April 4, is it possible to suspend it?

No, it will certainly be prolonged, because up until today the traffic bans, the closing of businesses, haven’t shown the signs of functionality. In other words, the curve continues to grow. It is expected that in ten days we will reach the peak and the curve will begin to decrease, but they’ve been changing those estimated 10 days.  Yesterday the quarantine was extended, it was until March 23, today they just informed that it is extended until April 3. And it will surely be extended because it is out of control, there is no control of the contagion. The measures are strong, but more measures are still needed.

How do you survive economically in an epidemic? Your work activity is suspended, your wife works in a company, and is also at home.

That is one of the things that most worries the population. Besides the contagion itself, people are practically at a standby in their homes, without income, at the expense of the benefits that the government may provide, which are being implemented. In my personal case, I have completely stopped working, my wife too, and that is how we all are, that’s how the whole country is. Everything has stopped, there are no flights, therefore there are no tourists, therefore the hotels are empty, closed, and it is a chain that has completely stopped.

Summer months are approaching where the economic activity rises because of the income from the influx of tourists, and at this moment what exists is a huge uncertainty because we don’t know how long this situation will last.

You are in communication with your family in Managua. There are currently two officially confirmed positive cases in Nicaragua. What can Nicaragua learn from the epidemic that is taking place in Bergamo and in northern Italy?

The first thing that must be clear is not to see it as the crisis that is not going to come, as something foreign, that is happening in Europe, in China, far away from us, and that will not come here and we are immune. Immune to what? That was the first mistake that was made here. When the first signs began, nobody gave it its due importance. The correct preventive measures were not taken, and the result is this.

So, the situation I see in Nicaragua is really dramatic, very troublesome, seeing what is actually happening here today. I don’t want to even think what may happen there in the face of such deficiency in the government. They have no action plan, they have practically nothing. But the best advise that I can give to the people is not to think that it isn’t going to come because it is going to come. It is already there.