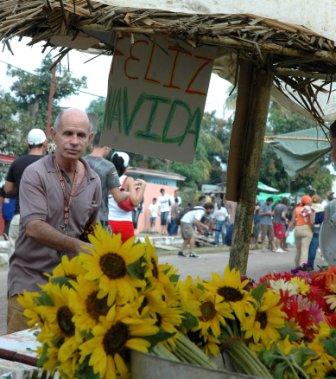 Many people recall the family gatherings and the dinners, even in the first years of the revolution. It was a deep rooted custom that seemed impossible to displace. Some believe the celebration became forbidden in 1969 when the call was made for massive participation in the 10 million ton sugar cane harvest and that it was reinstated with Pope John Paul’s visit in 1998.

However, there are those that believe that it was never really prohibited because there was no written law that said so; it was just a reflection of the times. A time in which the population was saddened by the death of “Che” and had no motivation to celebrate.  A period during which the effort to plant a protective barrier of fruit and timber-yielding trees around the capital took priority, and there was no time to celebrate. A time when volunteer work days were constant to assure the country’s development. A difficult period where nobody said what couldn’t be done, but it was clear what had to be done.

It isn’t necessary to prohibit something in writing if we know that we don’t want it to be done. There are many ways to prohibit, some more subtle than others, some more hostile that others. Some are more painful than others. Prohibitions are bothersome, and no matter how much they resist, human beings always try to keep them out of their lives.

You can celebrate Christmas or not. Christians believe in the birth of baby Jesus, non-believers enjoy a day of family reunion. The majority of people put out their best plates for the dinner on this date. Now it’s different. Now you can talk about Christmas or any other religious aspect without having fingers pointed at you, or being frowned on by society: that all-important society that condemns or extols you. The same society that has always been comprised of all types of people (believers, non-believers, the apathetic and enthusiasts) and who react differently depending on the period in which they live.