HAVANA TIMES – It’s said that History is written by the victors, and as victors they hold the power to create their own heroes (which sometimes take on God-like proportions). They also choose the losers, name their enemies and ignore more than one name that doesn’t sit well with them. It’s been this way since the beginning of civilization.

Luckily, there have also been people concerned with analyzing and researching the history written by victors so they can rewrite it in a more fair and impartial way.

Official books written in Cuba after January 1959 also have a long list of names that have been left out, sometimes because the people they belong to had the simple audacity to show reality for what it truly was, thus dismantling the image of a perfect society or Paradise on Earth which the Cuban Revolution has gone to great lengths to try and export from the very beginning.

It’s no coincidence that this list of non-believers features many artists. Who better than intellectuals to pick up on the virtues and shortcomings of the times they are living? Even though it’s more common to find writers or musicians on this list because of their ability to express things explicitly or because they have greater access to the masses, the visual arts also included people who didn’t follow the Revolution and decided to fill their canvasses and galleries with the things they witnessed and experienced on a daily basis.

Antonia Eiriz (Havana 1929 – Miami 1995) is one of these women who paid the dear price for her irreverence. Her artistic work began during Batista’s rule, but most of her creative work was developed during Fidel Castro’s time in power. This artist’s work ranged from teaching (she gave classes at the National School for Art Teachers and the National School of the Arts) to painting, engraving and installation art.

She received different awards over the course of her career, both in Cuba and abroad. In 1961, she received an Honorary Mention at the 6th Sao Paulo Biennial, held at the Museum of Modern Art, Sao Paulo, Brazil. 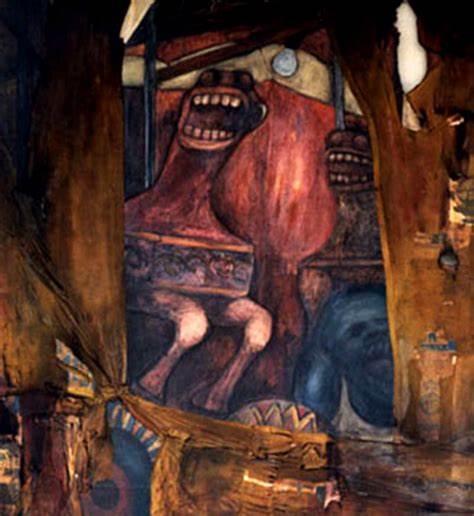 Her work depicts the birth of a new era which was saturated with political discourse, buzzing masses and utopian promises. The critical sarcasm and visual violence that can be seen in her work, turned her into a controversial artist in state institutions’ eyes who preferred to display a trivial art that didn’t go against the model of tropical socialism.

The acts of institutional censorship she suffered led her to retire from artistic creation for two decades, only teaching. In 1991, she decided to exhibit her work at the Galiano Gallery after her students pushed her to.

Today, 29 years after that legendary exhibition, Felices los normales (Happy are the normal ones) – the name is taken from one of Retamar’s poems – a curator project has emerged to pay tribute to this artist with the work of nine artists who follow her standards to a certain point.

The original idea came to Miriannys Montes de Oca (one of the participants) and was brought to fruition by curators Laura Martin and Sandra Garcia Herrera at the same Galiano Gallery where Ñica (as those close to her called her) returned to show her work to the public.

Works by artists Antuan Mena, D.U.P.P, Jorge Luis Rodríguez, Marco Arturo Herrera, Miriannys Montes de Oca, Miroslav De La Torre, Yohy Suarez and Yoxi Velázquez as well as works by Antonia herself, show the generational synchrony with her work. These artists capture the moment they are living in their art. Thereby documenting the new values and problems of contemporary society.

A canvas signed by Miriannys Montes de Oca entitled, “La Cola”; manages to transmit to the viewer the torture and stifling experience of waiting in line in Cuba with its colors and figures, which is something that every Cuban has felt, as well as foreigners who dare to live the real Cuban experience.

Marco Arturo Herrera uses colors representative of this tropical region and his work is a portrait of the carnival-like idiosyncrasy and warmth of the people born in Cuba.

In short, this exhibition is worth seeing and not reading about. It is open to the public from until March 7, 2020, and more than a curatorial project, it is a requiem to Antonia Eiriz.

It also proves that her work continues despite her death or the media death she suffered even until today, because generations after her who really look into the history of Cuban art think of her as a legend and a source of inspiration. Eiriz was more than just a papier-mache teacher and her work is coming to us like a cry of dissent with the times she had to live.