HAVANA TIMES – Diana Lacayo keeps in a trunk the evidence of the innocence of Scannierth Merlo, her 22-year-old son, who was sentenced by Ortega’s justice to five years in prison for the alleged crime of forced robbery to the detriment of a “CPC” (the FSLN party organization) of her neighborhood. Merlo was captured on November 6 by paramilitaries and joins the list of at least 161 political prisoners that the dictatorship has confined to the country’s prisons.

Before the April Rebellion broke out, Merlo was dedicated to his work, to his wife and daughter. He decided to join the peaceful protests when he saw the violence with which the police attack the student’s demonstrations. For seven months he actively participated in the calls launched on social networks to march or carry out express sit-ins. He was apprehended on November 6, 2018, after being kidnapped by a paramilitary groups.

According to the prosecution’s accusation, Merlo stole a Sandinista Front militancy card from a CPC in the neighborhood. The judge who was in charge of his case was Edgard Altamirano, known for imposing 216 and 210 years in prison on the anti-canal peasant leaders Medardo Mairena and Pedro Mena, respectively.

“The judge sentenced him to five years. He said that just with the word of the victim was enough to condemn him. He did not accept any evidence in favor of him (her son) or a mediation to solve the problem that they themselves had created,” maintains Merlo’s mother.

As other political prisoners, Merlo was confined to the cells of La Modelo Penitentiary System, in Tipitapa. His name is on the conciliated list between the Civic Alliance and the Government, after the agreements of the second attempt at national dialogue last March and, in theory, was going to leave with the other political prisoners earlier this year. However, he was not released.

A change in political trials

Merlo’s political process was plagued with flaws. The judge “hurried” to condemn him and admitted the crime for which he was accused despite the multiple evidence presented by the defense in favor of the 22-year-old.

Julio Montenegro, lawyer of the “Defensores del Pueblo” (Public Defenders) group, explained that the political prisoners captured at the end of 2018 and throughout this 2019, are being accused of common crimes to rest credibility of family members that Ortega’s justice system is holding them for having participated in the protests against the Government.

“The difference has to do with how a crime is classified, because in fact none of the crimes for which they are accused are established as political crimes. Now the situation is more complicated, because before it was much more evident when talking about arrest for being in the roadblocks, or people demonstrating on the street, people who provided food, who carried water, but now we are talking about drug trafficking, of the illegal possession of weapons,” expressed Montenegro.

The lawyer explained that the decision to blame protestors for common crimes has to do with the lack of credibility that the regime has at the international level in accusing citizens of being terrorists. “Suddenly, we had a lot (of them) here,” said Montenegro, who insist that the dictatorship’s judicial apparatus pretends to be more “convincing” in the processes they fabricate against protestors.

What has not changed in the judicial processes are the flaws and irregularities that the prosecutors commit and that are allowed by Ortega’s judges. Before it was common for detainees to spend a lot of time in prison before being convicted. Now the days or weeks that go by without them being taken to the court is less.

“Today we may be talking days, but the person is always arrested first and then come the facts or the person is investigated first and later the case is contrived and they say that it was in such and such a date,” Montenegro stated.

The lawyer said that other flaws are repeated in these new processes in that they are closed hearings and trials. Likewise, the judge accepts all the contentions of the prosecutors, even if they have no legal basis, while those of the defense lawyers are denied.

The solidarity of Wilfredo Brenes

On November 15, the Police arrested 16 Nicaraguans who brought water to the mothers of political prisoners who were on a hunger strike at the San Miguel church, in Masaya. The Prosecutor’s Office accused them of alleged illegal arms trafficking, and they will be subjected to a kangaroo court on January 30, 2020. 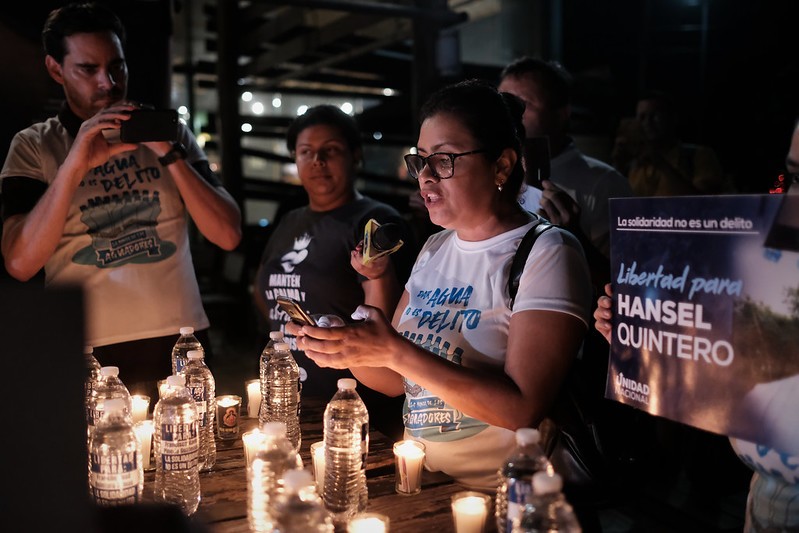 Wilfredo Brenes is one of the 16 detainees. Like the other citizens, his “crime” was to try to bring water to the priest of the San Miguel church and the mothers of political prisoners. The man, a native of Masaya, had been arrested twice previously without being formally charged.

“Wilfredo is a professional, he has a degree in international law. In addition, he is a merchant, and he has sought to survive selling roast chicken. That is how he maintained his parents and his daughter,” said Maria Montalvan, Brenes’ foster sister.

The spark of protest against the Government was ignited long before the April 2018 Rebellion. According to Montalvan, her brother was very upset when he began to see the news of evictions and repression against peasants protesting against Ortega’s canal concession.

“When we saw the peasants who were beaten, whose land was taken away, all those injustices that the Government committed against them, he told me that all that was very bad and that we had to protest and not leave them alone. Then, when the first march in Masaya took place on April 19, he decided to support the population, and he became one more of the self-organized,” she says.

Unlike the 13 citizens who belong to the Blue and White National Unity movement, Brenes was captured at midnight on November 15, a few hours after the “band of the 13 ‘Aguadores’” (Water carriers) was transferred to the cells of the infamous El Chipote jail in Managua.

That night, Brenes left his roast chicken sales position with his two assistants. He read the news that water and food supplies were running out at San Miguel, and along with his workers decided to take provisions to the church.

According to Montalvan’s version, Brenes managed to pass two police security lines that were surrounding the parish. When he was about to pass the water, he was captured by paramilitaries and then transferred to Managua. Without being at the same point and without knowing the other 13 citizens, he was charged in the same case and also accused of illegal arms trafficking.

“He is innocent, since the beginning he has been an innocent person and all those young people are innocent and there are witnesses of what happened. What the police is doing here is a fabrication along with the Prosecutor’s Office, inventing charges against innocent people whose only crime was to be in solidarity and take water to those people,” Montalvan said.

Last week the National Unity movement and relatives of the prisoners of conscience launched the campaign “Christmas without political prisoners!”, for the release of at least 161 detainees. The announcement was done in the parking lot of a building in Managua. 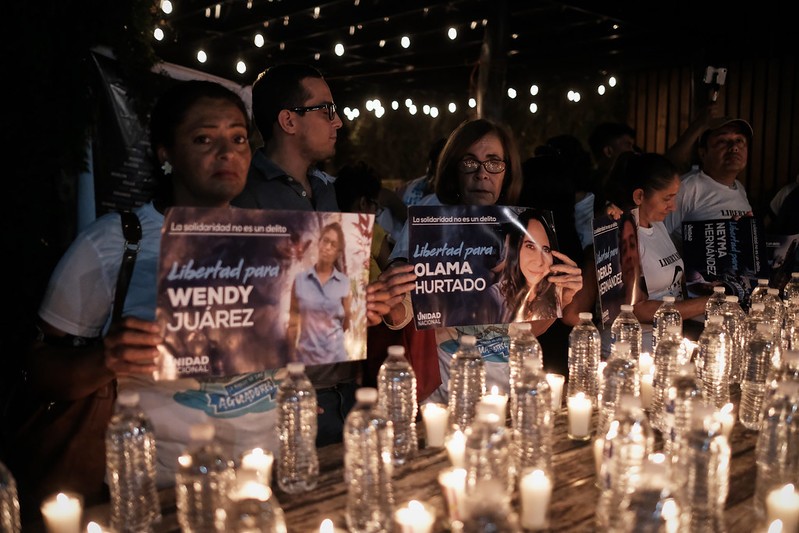 The position of the relatives of the prisoners of conscience is clear: as long as the Government does not release the more than 161 political prisoners, protest actions will continue.

Juan Sebastian Chamorro, member of the board of the Civic Alliance, said that this organization supports the campaign carried out by the mothers of political prisoners, and adds that it seems to him ironic how people who were imprisoned in the 70s, and for whom a similar initiative was launched, are the ones that currently are accusing the protestors.

“I hope that somehow this dictatorship feels some compassion and thinks about the families, in the importance of celebrating Christmas. A year ago, we were talking about Christmas without political prisoners and the dictatorship ignored that call. This is the second Christmas season that we are calling so that there are no political prisoners, and we hope that this time they will pay attention,” he said.

Diana Lacayo, mother of the political prisoner Scannierth Merlo, adds that as long as Daniel Ortega does not authorize the release of their children, the mothers will continue to protest and will continue to be national and international news.