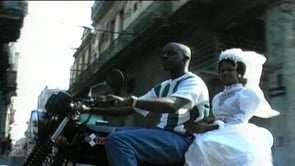 HAVANA TIMES — The documentary “A Wedding in Havana” was made during the height of the mid-1990s Special Period economic crisis, a crisis that for many Cubans never fully ended to this day. It gives us some insight into a period in time that people prefer not to talk much about from the disillusionment and pain it represented.

Here’s the synopsis from the director Miriam Day.

“After the collapse of the Soviet bloc Cuba was plunged into crisis. Blockaded by the USA, their major trading partner gone, the Communist government invested in tourism to bring hard currency into the country. This led to a two-tiered system in which those who had dollars could buy goods unavailable in the local peso economy.

“Many Cubans became ‘jiniteros’ – offering illegal services to tourists, from city tours to prostitution – in order to get by. A ‘Wedding in Havana’, made at the height of this crisis, is a snapshot of a moment of disillusion as seen through the eyes of three couples from Old Havana.

“We made the film using a small ‘hi-8’ camera. This version has been through many generations and it shows – but the camerawork, by Vicente Ferraz, still glows with life.”

To see some of the other films by Miriam Day click here:

A Wedding in Havana from havanatimes on Vimeo.

4 thoughts on “A Wedding in Havana (documentary)”