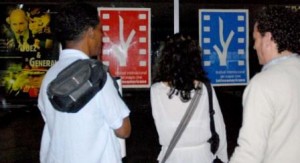 HAVANA TIMES, Dec. 1.- The 30th Havana Film Festival (Dec. 2-12) starts Tuesday with a full day of films. Once again the landmark Hotel Nacional is the event’s headquarters and the official opening takes place in the evening at the Karl Marx Theater where the Argentine/Korean/Brazilian film “Leonera” will be screened. Havana Times will be bringing you daily chronicles and some of Caridad’s great photos to make you feel you are in the Cuban capital taking part.