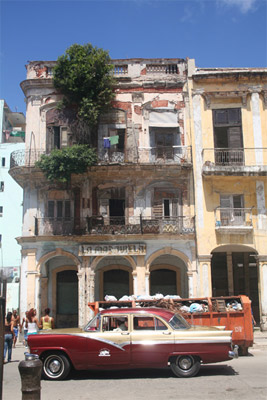 HAVANA TIMES, Feb 21 — Recently I was talking to a friend about the situation that Cuba and its people are facing. Without letting me finish, she jumped up — almost hysterical — and said how pointless it was to talk about that issue. According to her, “What you can’t change, just don’t try to figure out.”

This friend fervently believes that her problems will be resolved as soon as she leaves this country.

I had an excellent relation with another former friend, also a Cuba woman, until the moment I decided to suggest she look at a video on the Estado de Sats website. The subject was the “The Media in Cuba,” which was filmed this past December and featured David Canela and Eliecer Avila and me.

Without a second thought, the now former “friend” responded to me with a sharply phrased email in which she clarified her status as a “representative of Cuba to the world” (she’s in Japan doing her doctorate).

Given these times, it’s hard for me to understand this person’s fear of clicking onto a website, even more so since she’s thousands of miles from the censors. She must be suffering from a deep pathology when, despite so much water between her and Cuba, she continues to experience such a high level of fear.

Another friend who works in Mexico told me that he met a Cuban who immigrated there more than fifteen years ago with his family.

He said that whenever he starts to talk to this person about what’s happening in Cuba, the guy will grab him by the arm and walk him out to someplace where no one can hear them (as if he were still in Cuba).

The guy reminded him that “no matter how far away you are, you still need to take precautions.”

If these examples have something horrible about them, the only thing would be their incredible accuracy. This is what happens to people from a country where the only options to responding to the excesses of the government are silence or exile.

The situation is such that the agronomist and director of the magazine Consenso, Dagoberto Valdes, has given it the name “anthropological damage.”