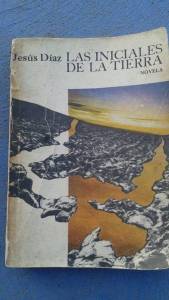 HAVANA TIMES — I’ve finally read “The Initials of the Earth”, a novel written by the Cuban film director and writer Jesus Diaz, published in Cuba and in Spain during the late 1980s.

I grew up with the insistent recommendation of reading it, a fundamental text in understanding the Cuban Revolution’s early years. Today, at last, I was able to finish reading it and I managed to do so in just three days, during which this excellent book captivated me so much that I decided to write this article.

The people who once recommended it to me weren´t mistaken. While I’d known it was a good novel, I really couldn´t imagine it being so great, the book in question doesn’t spare anyone.

Carlos Perez, the main character, represents the generation who, more than just supporting the Revolution, literally burnt their ships for it. – In my case, I have my father as a close example. Carlos, a middle-class man when the Revolution won out, was not only ready to leave his family, breaking ties with his sick father and his brother who left for the US, but who also abandoned his old mother so he could fulfill the Revolution´s objectives.

These were always heroic tasks which called for 100% passion and dedication. So, Carlos enlisted with the militia taking part in extreme training exercises so as to be on the ready for an always imminent war, he went to fight at the Bay of Pigs, although to escape, he just had three hours to visit his dying father- as the Revolution didn´t give him time off for such trivialities- he couldn’t go with his battalion to fight against “outlaws” in the Escambray mountains which he would then go on to regret, at least, until the end of the story.

Carlos, a young white and of course heterosexual man marries a mulata, creating domestic chaos. The protagonist, like so many thousands of honest, hardworking and also, why not? naive Cubans, believed that they were making a Revolution that went beyond just fixing the problems at home on the island, but would fix the world’s problems too.

This is why the revolutionary’s sine qua non condition was extreme, unconditional and perpetual loyalty to the Comandante.

In 1970, this man made his millions of followers believe that in order to pull the country out of underdevelopment once and for all, what they needed to do was to organize a 10 million ton sugar harvest, that was all they had to do.

The country threw itself into action to try and make this miracle come true and eliminate poverty in these lands once and for all. Carlos, the manager of Cuba’s largest sugar mill, believed that he was a key piece in this transcendental event, but that wasn’t the case. Reality with its stubborn sagacity proved the complete opposite in the space of a few short months, that it’s impossible to produce 10 million tons of sugar in Cuba per year and much less, leave underdevelopment in the past if the Cuban people unconditionally and pig-headedly follow a man who isn’t interested in the country, but in his power and his personal glory. Underdevelopment usually persists in the minds of those who follow this kind of men.

Jesus Diaz, a man who also burnt his ships for the Revolution, at least for his first 25 years, ended up renouncing it.

His desertion in 1989 was perhaps the strongest blow that the Revolution received in terms of intellectuals abandoning ship, he had been on the editing team of the Pensamiento Critico magazine, then of Caiman Barbudo magazine, he was awarded a short story prize by the Casa de las Americas when he was only 24 years old, and he was an ideologue at the Cuban Film Institute (ICAIC) when he abandoned the country.

“The Initials of the Earth” is truly a must-read, it´s written exquisitely and doesn’t leave any loose ends; the snitch, the opportunist, the naive man and the extremist all live in this story as real characters of a Revolution which still hasn’t ended amidst the landscape of a tired society where so many outdated characters still swarm.