HAVANA TIMES – “They’re going to operate tomorrow,” Alex tells me with a knot in his throat. His 81-year-old mother has only been given a 1% chance of making it out of surgery alive. Clara Pozo Aleman is a diabetic patient, with high blood pressure and heart disease, which need to be constantly checked so as to ensure her quality of life.

On September 26th 2019, she underwent eye surgery. She had really high blood pressure and blood sugar levels, which is counter-productive for going under the knife. Yet the surgery went ahead, and she suffered a cerebral infarction, which doctors covered up the entire time.

The first symptoms began to show themselves that very same day of the terrible operation and her physical condition just got worse, until she suffered three consecutive brain ischemias, which left her completely blind and with dementia that just got worse as time passed by.

“They almost sent my mother to a psychiatric hospital after doing a CAT Scan,” her son tells me, remembering the day when she still had her wits about her.

During that time of hospital appointments because they were still trying to diagnose her, she was given an ultrasound to rule out any tumor, although they knew that this part of the rectum is pretty much invisible using this diagnosis method. She needed something a lot more detailed, in order to pick up on the affected area and not transform her terminal state into an unfortunate state.

Admitted into the Arnaldo Milian Castro Church in Santa Clara, where she was given a colonoscopy, she is neglected by health professionals, who don’t even listen to her, or measure her blood pressure (in spite of her having high blood pressure).

Doctors do their rounds once a day and they are very short. In the meantime, they spend their time playing with their phones and laughing out loud, while there are patients lying in a critical condition all around them, as well as companions who can’t rest properly because they are tending to their relatives’ needs and they don’t even have a proper chair to sit down on a lot of the time. as they are all pretty much broken. 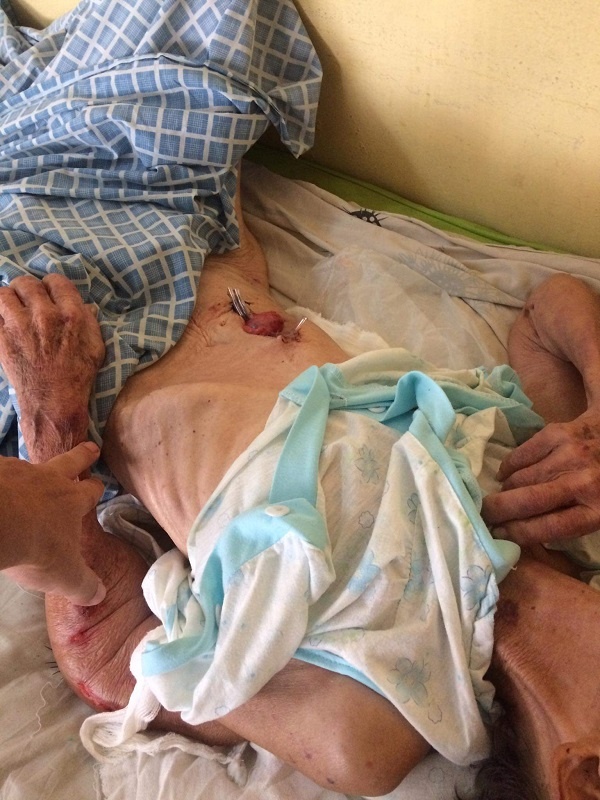 There is practically zero hygiene. Bathrooms and corridors are cleaned by inmates from the nearby Guajamal prison, and they don’t use any bleach, just water.”

“I had to kick up quite a fuss for them to see her,” the eldest son tells me. “Do you know what it’s like to have a woman who has just been operated on and you’re not even given colonoscopy bags, so we have to spend all our time looking for swabs and gauze to clean whatever she is constantly evacuating from her body.

I can’t clap, I can’t in this immune and hypocritical way, which attack the most basic ideals of dignity and human resources that were instilled in me by the person who is now being looked at as if she were a guinea pig waiting for her end.

The end finally came and I received the expected and horrifying message: “My mother has just passed away,” he writes to me. I don’t answer, I don’t say anything, I just lower my head thinking that she has passed away in the saddest and most degrading human conditions, while people continue to clap at 9 PM.

One thought on “It’s Not All Applause and Nobel Prizes”