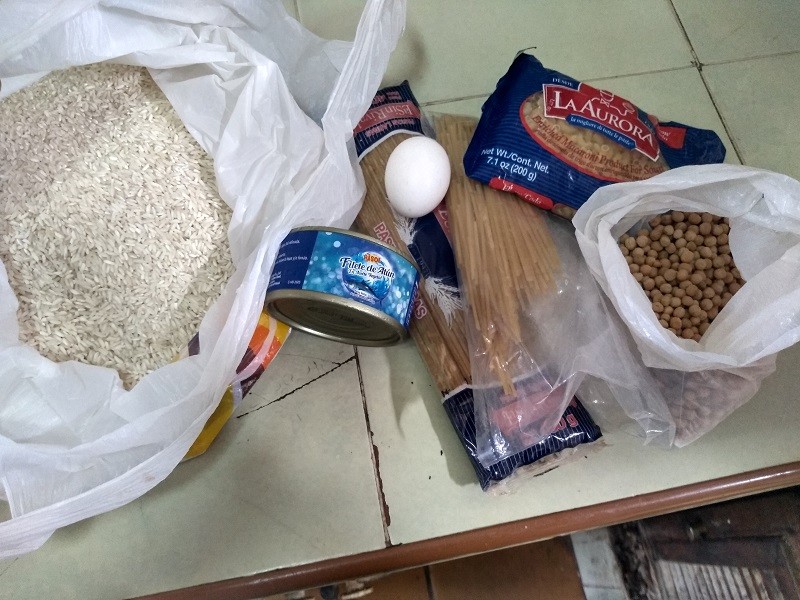 HAVANA TIMES – The neighborhood is asleep, only Pilar – sitting in her doorway – begins to weave away the early hours with the distant noise of a beat-up radio. She looks at me. She greets me from afar, as if she wanted to hug me.

I have never had more than a simple exchange of “HELLO” or a “How are you?” from her, but those of us who have a different sensitivity can pick up on extremely strange connections, that others wouldn’t see.

The point is that the image of this woman dragging along on worn-out flip flops has stuck with me. Everything is old about her, battered, as if her hands had never touched anything new, as if her nose had never known the aroma of something freshly made.

Then, something other-worldly happened, as if she could read my thoughts. She looked at me, her eyes widened and she said to me: “Hey, you, the things they are saying in the news here, that there are thousands of people dying in the North [the US], that there isn’t any food, or medicine and my son… Oh, God and the Virgin Mary look after him for me.”

My chest tightens again. I can hear her half-muted voice again through her mask: “If it weren’t for this damn virus, I would invite you into my home and tell you everything…”.

As the saying goes, curiosity killed the cat, and it was like a shot of intrigue that even got my immune system excited and I quietly said: “Well, if we respected social distancing, we might be able to talk.”

I asked her about her son and her eyes teared up: “He left Cuba so long ago. He was a Christian.  He’s a church pastor in New York. Things are going well for him, well I think they are, I don’t know right now with all of this pandemic business,” she says as if it were a drawn-out sigh.

I try to cheer her up and say that I’m sure he’ll come to visit her once this is all over and she tells me: “No way, my girl, are you crazy? He swore he would never come back. This son of mine was picked up one night from his bed and taken to a work camp in the countryside as if he were a prisoner.”

“That place was called UMAP. People who were different were taken there, and my son was good. Poor lad, he wasn’t himself after six months of being there. He was thinner and he didn’t have that beautiful smile of a Havana mulato anymore.” The woman smiles and a tear drop falls down her cheek, which then gets lost in a small wrinkle on her face.

I feel sad for her and to change the subject, I ask her how she’s getting food. Answering me, her eyes open really wide: “Well nothing, I can’t buy anything, I can’t be out on the street, but I don’t have money anyway hahahaha.”

Finding myself in this situation, I feel like I’m on the brink of an emotional breakdown. I take a deep breath and get a hold of myself while I watch so much poverty around me and such a rich spirit.

I am sure that this woman noticed something in me, because to console me, she opened the refrigerator and she told me: “Look, my girl, here I have rice, some spaghetti, pasta, an egg…!, ah! and a can of tuna that my neighbor Armando gave me. Yes, Armando who lives around the corner, the one who rents his place to foreigners.”

Like a super slap to the face, she says to me: “Do you need anything? Take whatever you want, no worries.”

This too, Pilar, your blanket, your ring… and your shoes, Pilar? Marti’s verses hammered in my brain.

We sat in silence for a couple of seconds, as if we were respecting the most intimate feelings. She gets up and like a spoilt and insistent child, she asks: “Are you going to come tomorrow?  Say yes, and we’ll talk a little more.”

She laughs and gives me a sneaky ultimatum: “Whoever hasn’t wanted to talk to someone during all of this, well let them throw the first stone!!!”

Stories like this play out over and over again during these isolating times. Every Cuban has neighbors in this situation. Giving not only material support, but emotional support, will help us all live with greater integrity.

6 thoughts on “Who Throws the First Stone?”