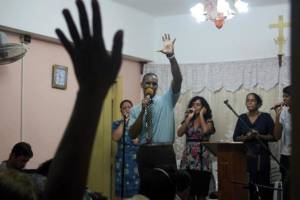 HAVANA TIMES — The rise of new cults or religions, similar in their psycho social patterns, has been no secret to anyone in Cuba over the past few decades.

Some of these, as I see it, are the following:

The watchman: now a keeper of the faith, this is the most common figure. They usually wear white, light-colored or checkered shirts, with a pen peeking out of the breast pocket, of course. They put on dark pants and shoestring shoes. Their field mission is to spread the faith and they look like secret agents yanked from the last years of the Cold War, when being a spy or an informant was like a hobby.

The intellectual or ideologue: these have the same outward traits as the previous, but an emotional detail link them more intimately to old doctrines. At one point, they wanted to wield some form of power or exercised it, and they still show signs of having once taken part in official, organizational tasks. They are highly skilled at mobilizing people. They generally make use of the spoken word to spread the faith and rely on repetition for this. They tend to appear persuasive. Their sermons can be heard throughout the block.

Another case in point is the teacher, tasked with teaching others the religion. There are two main types of teachers whose characteristics are linked to their respective generations.

The first: if they were trained by the pedagogy of Russian teacher Anton Makarenkos – whose methods and doctrine were imposed on people in the 1960s in Cuba – he applies an ideal consisting in revealing the harmfulness of doubt when it comes to the holy scriptures, in keeping with the most convenient interpretative method. He can suddenly become hysterical.

The second type of teacher may disagree with Makarkenko’s methods. A younger man, he was not a victim of Russian pedagogic theory. He can even make jokes as he reveals the scriptures. He seeks general acceptance, particularly from intellectuals. The Makarenkos, on the other hand, use a briefcase like those used by computer programmers and is closer to the watchman.

The opportunist shows more passion than the rest. He leaps from one religion to the next until finding his own. His interests and aims can be very different in many cases, and he may achieve them.

These congregations include professionals from all sectors: lawyers, medical doctors, artists, athletes, engineers and others.

Their ideological mentalities, foreign to us and frequently to their own families, are governed by a primitive, backward and absurd egalitarianism.

On the other hand, having turned their backs on Cuba’s social reality, they condemn our syncretic religious heritage, all elements of national identity and respect for sexual diversity.

Without false expectations gender problems among them appear not to exist.

The women in these religions are not very picturesque. The most notable ones, at best, are “enlightened” (that is, professionals) and are skilled in conveying abstractions in public. The others are the same old, far-from-subtle people, but now, they elevate gossip to a kind of theological ethos. A common topic of conversation for them is disease, epidemics and misfortunes of every kind.

I can’t fail to neglect the influence that new technologies and sources of information have had on this phenomenon. These are used to divulge foreign videos of hysterical preachers and devout church-goers which begin to penetrate the collective imaginary in these religions in my beautiful country.

One thought on “Cuba’s New Religions”