HAVANA TIMES — The congresses organized by the Latin American Studies Association (LASA) are like Persian bazaars, places where you can come across all sorts of people: wisemen and charlatans, guards and buffoons, jewels and cheap trinkets.

This is what I had the opportunity to confirm during my participation, as a speaker, in the last gathering held in Washington, D.C. at the close of May.

It was also an opportunity to confirm the affection and loyalty of old friends, to make new ones and to observe the brilliance and intellectual poverty of homo academicus in their full magnitude.

It was the latter, particularly, which I came across most often, from mediocrity disguised as radicalism, through dogma camouflaged as science, to a mixture of intellectual fashion, dictated by the demands of the academic market, and authoritarian logic, born of particular reasons of State. It was altogether curious to see a number of colleagues give voice to these trends, enthusiastically or abashedly.

This congress placed two, contrasting realities before me. As a member of LASA’s Venezuela panel, I was able to take part in the organizational debates of an academic community with a plurality of disciplinary, ideological and practical referents, driven by the interest in broadening the horizons of the group’s work.

During a fluid exchange that was devoid of the tensions that frequently beset all discussions regarding the sister nation, historian Margarita Lopez Maya – a renowned scholar devoted to the study of social protests and contemporary Venezuelan history –  chaired the meeting in conjunction with participants, which included a number of young scholars.

The day’s discussions centered on the search for new financial administrative mechanisms, incentives for research work (including the creation of a Panel Award, consisting in contributions from members) and the divulging of the results of research conducted by members.

These talks were seasoned by the Caribbean informality which makes the Venezuelan academy far more agreeable, in its ways and tone, than its counterparts in the region, caught up in stiff rituals and colored by a holier-than-thou attitude.

By comparison, the participation of my Cuban colleagues in the debates showed, at best, a rather different dynamic and intention.

While it is true that the idea of having an official Cuban delegation represent the country at the congress was expressly, I dare say suspiciously rejected by Cuban academics who participated in the forum and that new voices from the Cuban academy, the dissident movement or the community of autonomous activists that exists on the island today gave the gathering a fresher, more plural portrait of Havana’s intellectual life, it is also true there was a subtle scent of Cold War tension in the air.

This feeling was most clearly expressed by the awkward and rather ridiculous public chastisement of US scholar Ted Henken, in response to his opposition –expressed both within and outside of the Cuba Panel – to things as sensitive as the exclusion of Cuban dissidents from debates years ago and the institutional veto which prevented Cuban economist Omar Everleny from participating in the 2013 LASA congress.

Luckily, good ideas, fresh exchanges and new faces prevented the caricaturization of Cuba’s contribution to the gathering as delivering in bloc the contribution to the event from Cuba. Though some may claim the opposite, Cuba is more than its public officials.

The latter, the more or less sophisticated bureausophers or mere compartmentalizers of thought, continue to do much harm to our public sphere and intellectual community, which are, by definition, transnational.

What’s cause for concern is that those who select Cuba’s participants to the congress do not appear to have noticed that times have changed, both inside and outside the country, that Cuba can no longer rely on its captive audience of yesteryear, ever willing to swallow a spiel about the blockade and to forgive any out-out-date, imprecise or distorted social science concept, invoking the “uniqueness of the Cuban situation” – where, as we know, anything remotely important or controversial is skirted with the pet phrase of “it’s a complicated issue.”

If they are at all interested in retaining a measure of credibility and drawing others to a serious debate at LASA congresses, these officials will urgently need to learn how to debate, how to acknowledge other’s existence and tolerate diversity and pluralism. In short, they will have to put behind the pseudo-authoritarian practices they are used to and understand what Marxist thinker Antonio Gramsci had in mind when he spoke of the construction of hegemony. 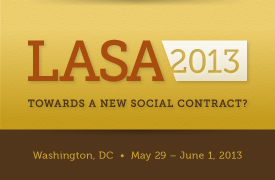 The drastic contrast between the postures assumed by Cuban and Venezuelan intellectuals who reside in their country of origin and participated at this year’s LASA reveal the differences between their roles, and positions, within their respective countries and before the States they are a part of.

Curiously enough, and contrary to what some may assume, the economic situation of these two academies is not qualitatively that different: while it is true that the salaries earned by Cuban scholars continue in the dark bowels of the underworld, it is also true their Venezuelan counterparts have seen their incomes plummet in an unprecedented fashion, and this in a country where the cost of living is just as high, or higher, than that of the island.

The scholars’ migratory status isn’t the decisive thing, either. The welcome reforms implemented in Cuba in this connection make it possible for those who have something to say to travel to a variety of global fora, regardless of any veto and without the need to secure institutional support on the island.

But our friends from Caracas, Lara or Zulia go through hell just to obtain air tickets and stipends and must resort to international cooperation agencies, the same ones that finance a considerable number of trips by members of the Cuban delegation.

The difference, thus, isn’t determined by material conditions or legal contexts. It is owed, rather, to the sense of autonomy these scholars have, the sense of what they can and ought to do, without any authorization other than that which stems from their conscience and feelings of intellectual responsibility.

Cubans are slowly beginning to understand that, if we want to be respected as intellectuals and citizens, we must explore what lies beyond the walls put up by the Father-State and recover the sense of liberty that was snatched from us.

Venezuelans, conscious of the situation they live in, defend the right to think and to express oneself freely, without restrictions or hindrances, as the only means of creating a truly aware, progressive and democratic society.

5 thoughts on “LASA and Intellectual Autonomy in Practice”