HAVANA TIMES – Anuel, pounded on the small yet furious Bluetooth operated speaker, which Blanco appears to cherish. At any given opportunity, he will turn it on and start blasting thick Latino rap, trap and reggaeton numbers.

Anuel, the risingly popular Puerto Rican ex-con being his favorite artist. ‘La Yeezy’*, which is a decidedly misogynist and violent track, hammered against the stained, yellow walls of the drug dealers’ tiny, claustrophobic studio apartment.

“The demons, the devils and the wolves,
The A-K and the caobo cape,
You’re married but I’ll steal you,
You look like Carmen Villalobos,
Evil can be seen in your face,
The ass of Sofia Vergara,
I gave her 7,000 so that she operated,
And I gave her another 3,000 so that she got tattooed for me,
Eh! Eh! The devil in a woman,
She likes to drink and smoke,
I’m gonna roll up and light,
Put yourself on all fours for me baby, I’ma stick it in you,
I drink codeína, my bitch is posh,
Daughter of a bitch like the feline…”

I take in the horrifically offensive words whilst the three youths dance around chanting along to Anuel’s deeply slurred, semi-incomprehensible and heavily Boricua accented bars.

The three drug dealers are a pathetic sight. I’d been invited in to ‘chill’. Having nothing better to do and having to find a way of living in peaceful cohabitation with these wayward neighbors of mine?—?I reluctantly accepted. Yet with a smile. Taking some puffs on a vile blunt that was getting passed around, I choked, toked and smoked before moving La Mari to the next fellow.

“I do hope to find myself leaving this place soon”. I thought. That being where I am currently living. I entertained thoughts as I watched the three poorly-dressed, pistol-holding, skinny youths jump about and get high. Some cheap rum came out of Blanco’s back pocket; he appeared in an Italian football shirt, tacky chain round his neck, baseball cap and with his trademark Argentine pistol tucked in the sagging jean tops. 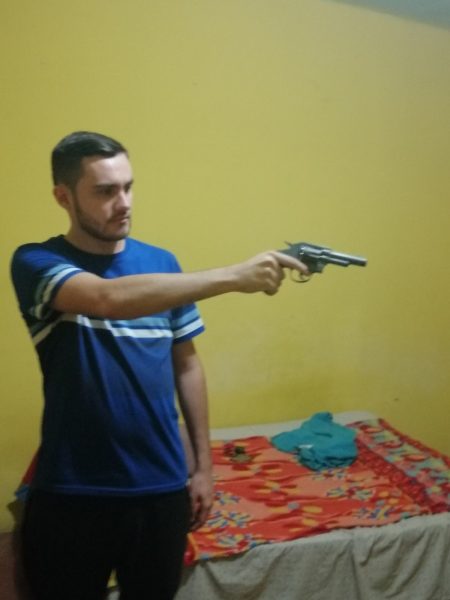 It was then that I had my photo taken with it.

This, being his associate’s idea.

So I did. Not sure how ‘cool’ it turned out. The reader can be the judge. Their shared mattress appears in the background; the only item of furniture that these impoverished, MS-13 connected dealers own.

The themes, being quite hideous.

“I was in prison. Ugly… real ugly. In prison they’re not playing dog. They rape, they kill and everything.” Blackie, 19 year old drug dealer.

All three of them have been inside. The marijuana, coke and all the other shit these nutters had in their system, seemed to be taking another effect. They appeared melancholy…

“It’s uglier to have to kill.” Went Blanco. From out of nowhere.

All three of them have probably killed as well.

“I want some ice cream”, announced Blackie, changing the mood.

“I’m going to the bathroom, I feel bad.” I stated.

“Shall we bring you an ice cream dog?”

I informed them that it was a kind offer, yet I was quite alright.

These are the strangest youths that I’ve encountered in quite a while. The way that they will let you hold their weapons, discuss prison rape and then ask if you fancy an ice cream…

Honduras, the land of crazy, unbelievable experiences, ladies and gentleman.

I spent the rest of the evening hiding away in my friend’s apartment?—?engaging myself in some Netflix.
—–

2 thoughts on “Getting Closer to the Gangbangers”