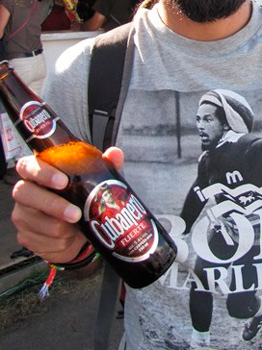 HAVANA TIMES – A Cuban friend of mine was recently in France. While there, he dropped in to check out a festival that the French Communist Party holds every year featuring exhibits from the Communist Parties of the world and their affiliates. My friend told me that he enjoyed some of the concerts that were part of the event, but that in other ways he was disappointed.

According to my friend, there were stalls with representatives from each country, as well as national food or drinks. Of course there were some exhibits where Cuba should have been represented, but there were no Cubans there, only many Cuban flags. Instead of Cubans, there were only French at the stalls. Except for the Cuban exhibit, all of the countries were represented by natives.

“They sold the worst revolutionary mojito in the world, and supposedly the most authentic Cuban beer in history: “Cubanero”, 100 percent Cuban; with a label that was identical to our local Bucanero beer, but with the name changed to read “Cubanero.” 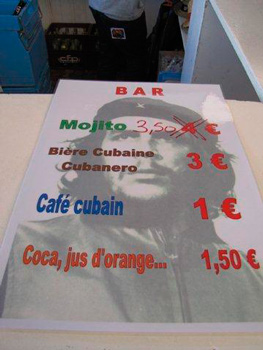 My friend asked one of the French attendants who offered it to him where it was from, and he responded proudly that it originated in Cuba and was exported by the Cubans themselves. To this, my friend replied ironically that he was a Cuban and had never seen it in his life.

The Frenchman responded with great embarrassment that he knew nothing about it. There were a lot of people there with Che pullovers, young people smoking cigars without the least idea of how. The only Cubans there were Rene Gonzales (one of two released Cuban Five members), who was speaking, and two salsa groups that no one in Cuba knows of. The emblematic image of Che from the Cuban photographer Korda, was being used as a background for the prices at the Bar, revealing a discordant mixture of ideology and marketing, or perhaps just the ignorance of the person in charge.

It was a huge disillusionment for my friend, because he felt that the image of Cuba that they used was completely false and that they were making money off of it. In the end, the only events of interest were the very good concerts that he saw.

9 thoughts on “False Image of Cuba in France”