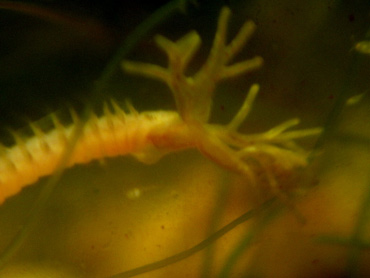 HAVANA TIMES — I have already written about the marine worms that have graced my fish-tank over time. Their beauty and interesting variations simply do not cease to impress me. New marine creatures invariably come along with the algae I bring home to photograph. I have discovered new animals whose peculiarity is worthy of a closer look.

It is a wandering polychaete that feeds on plankton and marine sediments, very similar to an earthworm (the recycling creature par excellence). They dig into the mud of the seafloor, a medium where nutrients are scarce, life is abundant and survival is the order of the day.

The feature I find the most striking is that their evaginable mouths conceal an incredible structure, the product of the process of biological adaptation. It is a set of gills that have been converted into extremities which, with the graceful movements of a hand, palpate the worm’s surroundings in search of food. These extremities, in the shape of a choral branch, are beautiful in and of themselves.

The worm only extrudes this sensitive appendage when it needs to feed. While moving among grains of sand or particles of earth, it must put its “hand” back in its mouth.

Another wonder of nature that deserves our attention and care.