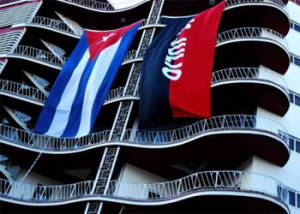 HAVANA TIMES, Jan 6 — This year I didn’t participate in the customary rituals of every December 31.

For many people here, throwing water out into the street at midnight is a spell aiming to purge the evils of the past year. It’s supposed to end and distance misfortunes from the year that has just begun.

I preferred to sleep.

With the arrival of 2012, the first thing that impressed me this year were all the flags.

One of them was the July 26th Movement flag, which I was taught was red and black – representing the blood that was shed and the mourning of the Cuban people. My teachers never mentioned the similarity of this flag with that of the anarcho-syndicalists.

The other one was the national flag, which also serves to commemorate the triumph of the Cuban Revolution on the first day of January in 1959.

Right now this flag hangs in many places across the country, ordered perhaps by the higher authorities.

We can see them flying from buildings that house university students, those youth who have to deal with poor diets and even worse hygienic conditions.

These also appear outside the largest computer club on the island, in a specialized clinic and over an expensive hospital that treats foreigners.

The flag adorns all those establishments that sell essential products in hard currency convertible pesos (CUCs).

Hanging from the balconies of some apartments, where the presidents of the Committees for the Defense of the Revolution might live, or some business operators in the neighborhood, we can also find the colors waving.

They accompanied some Christmas trees in homes, which these days even celebrate this previously banned holiday to the beat of Miami’s Willy Chirino.

However, I look at the Cuban flag but I feel nothing.

I’m almost completely indifferent to its white and blue strips. Nor am I stirred by its red triangle with a star inside (they say it’s silver).

I imagine Jose Marti or Antonio Mella preferring our flag in the face of colonialism (represented by the Spanish flag) or in the face of imperial policy, symbolized by the raising of the US flag.

But my story is different.

For twelve years I had to salute the flag daily and pledge “I will be like Che.” Throughout other years I was in marches (for Elian, for the Cuban Five, for November 27, for Mayday…) with the same flag there, but little ones made out of paper and attached to a smelly piece of wood.

It doesn’t move me, and I question whether “I love it with all my soul,” as I used to recite in a poem I learned in childhood.

Somehow it reminds me of too many decisions made from up above and behind the backs of the people.

I look at the flag from balconies, and when I see it I only manage to find a sabotaged symbol.