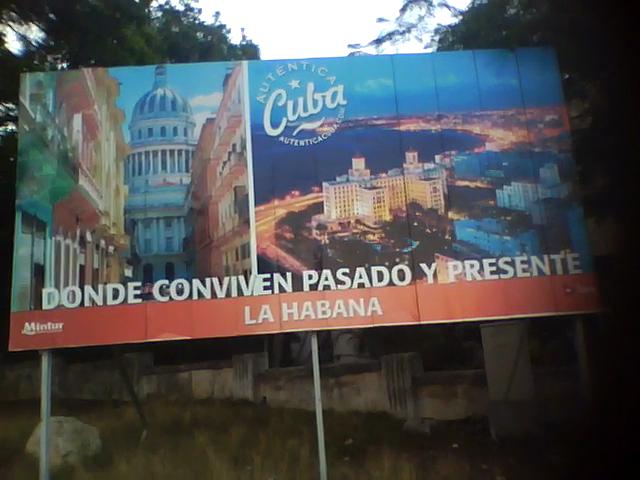 A few months ago I commented about the importance placed on billboards here, which are usually erected near the busiest streets and avenues in Havana.

The messages change frequently to show us the issues that the Cuban government wants to highlight.

Until recently these signs spoke to us about the Sixth Congress of the Party and the declaration made 50 years ago pronouncing the socialist character of the Cuban Revolution.

Likewise, other recent posters (those which announced May Day and the need for us to be more productive) are now being replaced by even newer ones.

The latest ones now appearing are full of colors and on one corner display the stamp of one of the most resource-rich ministries on the island: MINTUR (the Ministry of Tourism).

Since tourism began to outstrip the revenues from sugar exports in the 1990s, Cuba has gone head on with the construction of hotels and a whole gamut of tourist facilities throughout the country.

The force of this industry, considered for a long time as the nation’s lifesaver, goes so far as to include the creation of the Department of Tourism Studies at the University of Havana.

Now it seems that one of the outcomes of the recently concluded party congress has been the approval of tourist publicity across the city.

Announcements that previously could only be found in VIP waiting areas at the international airport now assault what seems like every corner on the streets of Havana.

The place which was for years was occupied by a huge poster featuring the landing of the Granma yacht has been replaced by another one with friendly islanders servicing tourists visiting the island. 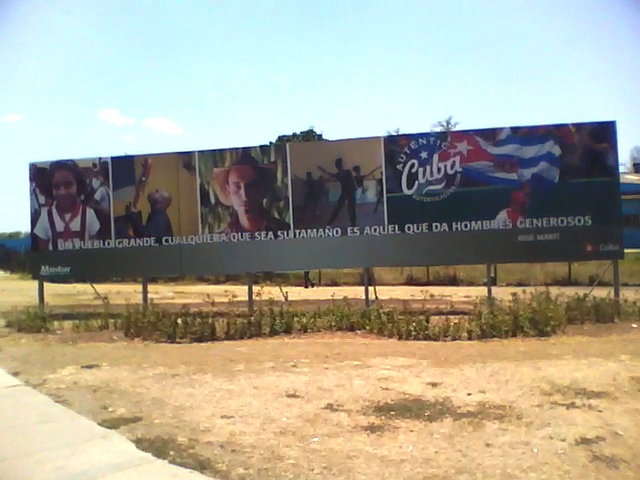 It’s divided into sections.  One shows a Young Cuban “Pioneer” while others display a young campesino, a ballet student, a musician and a baseball player.

It seems that the poster is trying to spotlight the free education in Cuba…or is it the fact that we’re good in baseball and ballet?

I didn’t get the section featuring the young campesino, everyone knows that there are few and virtually only older hands cultivate the fields in Cuba.

On one of the corners on Carlos III Avenue they’ve also placed an ad with a phrase that appears on the first line: “Where the past and present coexist.”  At the bottom of the image are partial shots of the Capitolio Building and the historic National Hotel.

So yes, they are trying to continue making money from the Havana of Spanish fortresses and buildings with neoclassical facades of the republican (pre-revolution) era.

Lastly, a poster featuring the beaches of East Havana has appeared at the exit of the tunnel under the bay.

This is how touristic Havana begins, differing from real Havana, where instead of young campesinos on the land they’re importing immense quantities of food.

This is the real Havana where baseball players who stay in other countries are erased from sports history as cultural activities have prices that continue to skyrocket.

This is where public education is declining in quality daily and the teacher shortage has yet to be adequately solved through “teleclases.”

More and more, real Havana resembles the pre-revolutionary Havana that so many have gotten tired of criticizing – the city where ads for Coca Cola, Polar Beer and Tropicana were never lacking.

To cap it all off, the next step appears to be to start building luxury golf courses using foreign capital, leaving any ecological or ideological scruples well behind.

2 thoughts on “Ode to Tourism”