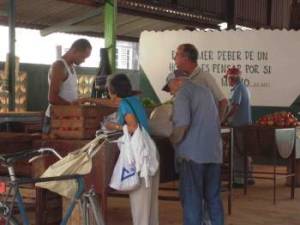 When one speaks from the crisis of values that our country has experienced since the fall of the socialist camp (meaning when the former USSR ceased being the USSR and decided to permanently get rid of its foolish stepchild, which is what Cuba represented to them), I always think about the generation that was coming of age at that time and those who were born and raised during the debacle that the Special Period crisis represented to us.

However it is not only our youth who have been feeling the bitter consequences of this decline in values.  The elderly are also seeking ways to adjust to a society where “anything goes.”

Incidents in often-mentioned agricultural markets are a barometer for measuring not only the country’s economic situation but also its moral code.

For many people, stealing has ceased to be something wrong.  A few days ago it was very sad to hear a clerk saying that it was the elderly and not the youth who were stealing products at his stand.  But it was even sadder to hear the words from the mouth of an old man himself.  Defending such actions, he responded, “A thief who steals from a thief has 100 years of forgiveness.”

I don’t know how favorable or unfavorable the approaching economic changes will be.  I don’t know how long it will take Cubans to assume — if that turns out to be the case — the focuses of a new society.  But there’s one thing I’m certain of: It will be many years before we reclaim the mentality that has been torn, twisted and tarnished by the consequences of these years of struggle for our very survival.