HAVANA TIMES – If the mainstream journalists were paid in Cuba according to their area of coverage, there would be two large castes: one, the very well remunerated sphere of international news; and the other, the very poorly paid field of national news.

The thing is, there’s always a lot to say about other countries but very little regarding what happens on the island. 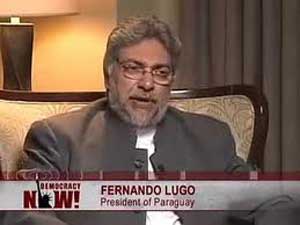 For example, these days the topic of the “parliamentary coup d’état” in Paraguay has been priority news to inform, give opinions, and assume a point of view about.  Of our national problems, we hear nothing, except for the customary announcements of “fulfilled” production plans in this or that agricultural sector.

It’s not that we should be indifferent to international conflicts, but I don’t believe that they should be headline news when so many things of interest are happening inside this country.

Whether or not the Paraguayan Parliament or Senate had engaged in a shady deal with the oligarchy to depose President Lugo is a matter for them to solve; even the phrase, “Parliamentary Coup d’Etat” seems odd to me.

Cuba has recalled its ambassador from the South American country and reaffirmed its refusal to recognize any other president, other than the constitutionally chosen one.

That speaks very well of their high sense of regard for constitutional rights, ha ha ha.

Nevertheless, the Cuban population knew nothing about the delicate state of health of the opposition leader Damaris Moya Portieles, who initiated a hunger strike last June 3rd to demand that State Security official Eric Francis Acquino Yera be brought to justice after threatening to rape her five-year-old daughter this past May 2nd.

The activist filed a formal complaint in the district attorney’s office against the agent, but there was no response from the authorities. And she demanded that the Cuban government “offer her assurances that her little girl would not face any danger at school”, while she was in prison.

Whether or not Mr. Fernando Lugo maintains the rights to the presidency in the face of his substitute Federico Franco, becomes news of the first order in our media, instead of reporting on an outbreak of cholera in the eastern part of the country. This latter news item, as always, appeared first in the unofficial news outlets.

On June 29, The Café Fuerte web site and many other digital newspapers began talking about the outbreak of cholera in the city of Manzanillo, in the province of Granma, with a death toll of at least two.

Granma, the official daily, would not give this news until three days later and even then in a small informative note, not on the first page. This item spoke of three deaths, but with a certain ambiguity as if it were already disproven that these were due to the epidemic.

The most terrible thing is that they referred to the disease by using its scientific name – in Latin “Vibrión Cholerae” – so of course almost nobody recognizes this as a term for cholera.  On top of that, they wrote it wrong, since the correct form is “Vibrio Cholerae”

In less than three years, perhaps we could have three political prisoners die due to hunger strikes. If cholera invades Manzanillo, we must keep silent about it, or mention it with an unintelligible term. But the fact that the events in Paraguay represent a coup – that, indeed, must be talked about.