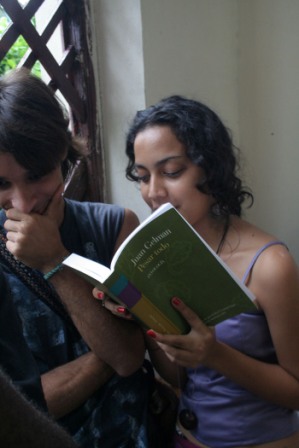 Every day we hear more criticism about some of the measures that were taken by the country’s political leadership during the period marked by what was called the “Battles of Ideas.”

This propagandistic gambit was accompanied by major expenditures on several controversial programs (such as the training of “social workers” and “fast-track teachers,” as well as the questionable substitution of the work of traditional teachers for tele-classes – which are only some of the ill-fated educational skirmishes pointed to by the critics).

However, this year we will see the commemoration of the 10th anniversary of that initiative.  Despite its weaknesses, I consider this effort to have been vital for Cuban culture if only because it involved the creation of provincial publishing houses.

In each province, small printing facilities were set up with Risograph technology that allowed the local printing of books.  Editorial councils (made up of specialists serving voluntarily) were created in the municipalities; I myself was a member of the one in my area.

Free of the typical bureaucratic obstacles, all types of authors brought in their manuscripts to our council, and several times a year we met to decide which possessed the quality deserving submission to the publishing house.  The publishing experts in turn assessed the works, and with luck the book would appear within a year.

We were able to rescue from oblivion the works of several dead poets who are today published in anthologies, and to also give an opportunity to young writers to publish their first writings.  To have one’s book printed ceased to be a privilege only accessible to people whose talent, relationships or resources allowed them to put a work in national circulation.

The Cuban bookstores filled with examples of local creativity, with publishers appearing with such romantic names as “Luminaria” (Sancti Spiritus) “Unicornio” (Havana Province) and “Extramuros” (from the country’s capital).  And in addition to books, each publisher put out a provincial cultural magazine.

In principle, today it’s much easier to publish, since previously people only became “visible” writers if they won some important award.  In a certain sense, regional publishing broke with the usual Havana-centrism that had harmed Cuban literature for so many years.

It’s tremendously stimulating to see authors receiving the first copies of their works, now turned into books, as their friends and neighbors form lines to acquire the texts.  The promotion of a literary culture at the local level has become a setting in which authors from their own community participate.

However, I believe that — even more than the poets and narrators — the initiative benefited researchers and essayists the most.  With active interest, I always look for what’s new coming out from the regional publishers, because they’re usually fascinating works that approach issues and propose concepts different from those published in the large national houses.

It’s been a privilege to be able make people aware of local histories that previously never found space in the “public” national historiography.  Many authors display original styles in their research, approaches that are generally not deprived of emotion and sentiment.  There are, for example, the characters in the book Hershey, by Amaryllis Ribot, who narrates the history of a singular sugar mill town, considered by the author to be “last model town” in Cuba.

There even appeared, for the first time, books by government publishing houses on spiritualism, psychoanalysis and on certain types of little-known religions.

I believe this is an initiative that should be sustained.  In the future I would like to see “friends of books” circles formed in provinces to stimulate and vitalize bookstores, which in part could be put in charge of the regional publishing system.  The authors could also belong to these circles under a special status, in this way creating a horizontal network of publications in line with the interests of each territory.  A national organization could take charge of mobilizing the necessary funds for maintaining the work, in addition to seeing to the distribution of the books at the national level.