—Each time that I walk through Santa Cruz del Norte (population 12,500, at the halfway point between the Cuban cities of Havana and Matanzas) I am reminded of Moscow.

The first balustrades that I remember are those of the granite observation deck in the Lenin Hills in Moscow, the city where I was born. From that vantage point there is an open view of the urban center with the gilded domes of the monasteries, the pointed tops of the Soviet skyscrapers of the fifties and the Kremlin in the distance.

When I first came across these balustrades as a child I was a firm believer that the modern geometric forms – angular, simple, and composed of straight lines, without adornment – had abolished forever the excesses of classicism, the gothic and baroque, those capitals and angel’s heads.

I didn’t know a darned thing about the exotic names used to describe architectonic styles, and they didn’t hold much importance for me. I lumped them all in the same bag, the bag of old things that you send to the attic.

For this reason, in that luminous decade of the seventies, the balustrades of Lenin Hills retained a kind of visual smell of things long kept, of that style of Soviet old age that I would later learn was called Stalinism.

To confirm my sense of smell, I delighted in detecting the places where a granite balustrade had been destroyed by some vandal and replaced by a bad copy made from painted wood. 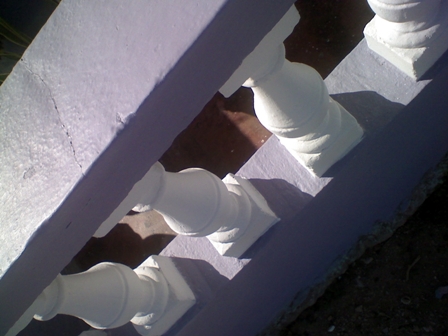 Today, in Santa Cruz of the North, I find myself surprised by the quantity of balustrades that people have constructed in their homes. There are balustrades in the doorways and balconies, on terraces and stairways.

It’s like finding that recent/ancient “state of mind” called post-modernity – a mood that has already conquered old Moscow – anchored in the depths of this peaceful old Cuban fishing town as well. Today Santa Cruz has also come to be a sort of “bedroom community” that supplies labor to an important industrial municipality on the northern coast of Cuba.

The balustrades are part of the new constructions undertaken on their own initiative by many Cubans. The chief materials are cement and at times plaster, the form is kitsch, and the aim is to reclaim a concept of beauty, and at the same time serve as a status symbol. 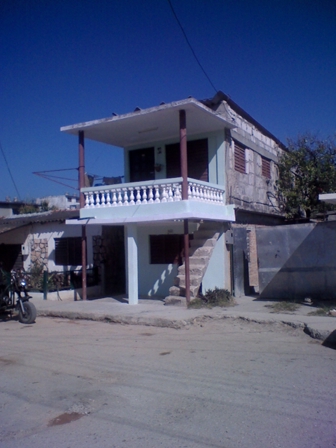 They make the balustrades by hand, although probably some state factories are also involved in the production. When money is lacking, the intervals between balustrades are excessively ample; when there is an excess, entire walls of balustrades appear, like a kind of exotic grating.

Many times they come accompanied by plaster chow chow dogs that are always looking to the same side, or by mermaids, busty caryatids with no arms, or dolphins trying but never succeeding in leaping onto the cement surface.

To cap off the insistence, the reconstructed site of the Military Command of Santa Cruz also proudly exhibits its balustrades.

Despite their discreet silence, the balustrades remind me of Reggaeton music; they are also marking the daily rhythms of those of us who inhabit this uncomfortable Caribbean island. They provide a visual rhythm that is almost omnipresent and that every day corrects the errors of my childish faith in the inexorable advance of modern forms. And while other forms pass on, they, like Reggaeton, seem to have come to stay.